The city has spawned and nurtured a vast range of high technology businesses in the past 50+ years and it has attracted other world-leading companies to set up operations here, including Amazon, Apple, AstraZeneca, Huawei, Microsoft Research and Samsung, to name just a few.

Do an internet search on ‘The Cambridge Phenomenon’ and you’ll turn up pages of results: academics and journalists have tried for years to distil the reasons for the success of the city and the surrounding region (dubbed ‘Silicon Fen’).  And an entire book has been devoted to it. The Cambridge Phenomenon: 50 Years of Innovation and Enterprise  – with a foreword by Microsoft founder Bill Gates – was published with much acclaim in 2012.

From computers to video games, from radio to wireless technologies, and from test tubes to blockbuster drugs, the sheer variety of what goes on in Cambridge makes the cluster unique.
- The Cambridge Phenomenon

A second book in the series, Cambridge Phenomenon: Global Impact - published in June 2016 - explores how Cambridge’s thriving entrepreneurial ecosystem has led to the creation of some of the world’s most important science and technology companies.

At the cluster’s heart is the intellectual powerhouse which is the world-class University of Cambridge, with its willingness and desire to promote entrepreneurship and industry. Many of the city’s home-grown successes have started life in the university, and many of the city’s entrepreneurs and angel investors are alumni. 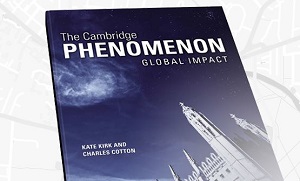 But the phenomenon which has evolved over more than five decades is a great deal more – bolstered by technology and product development consultancies such as Cambridge Consultants; local government’s attitudes to planning and development; and, importantly, the ecosystems of networks, professional services firms; angels, investors and mentors which have grown alongside and supported fledgling businesses.

Physically, the cluster has developed within a group of science, business and research parks located around the historic city centre.

Alongside dedicated networking organisations like the Cambridge Network – which exists to bring people together to meet and share ideas – a number of incubation centres, cafés and local hubs enable personal connections to be made. Technology enables people to collaborate remotely with partners near and far, and to enjoy modern, flexible working patterns.