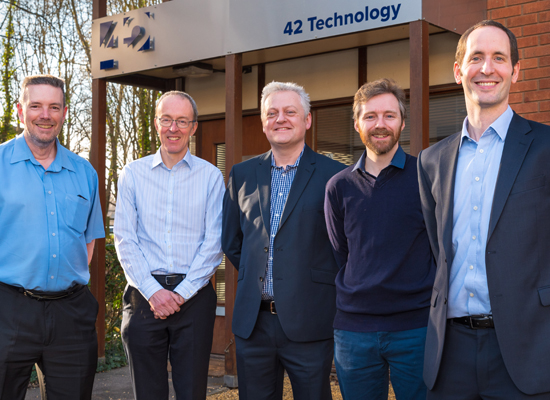 42 Technology has announced a series of senior-level engineering and consulting appointments, a newly created role of head of new business development, and a board reshuffle as the company powers ahead into a new phase of UK and international growth.

Three of the new appointments are aimed at further boosting 42 Technology’s existing in-house skills and expertise in electronics and software development:

At the same time, Dr Alan Hart has been brought in to lead the consultancy’s business expansion programme; and Dr Jon Spratley has been named as 42 Technology’s new managing director (MD), taking over from Jeremy Carey who is relinquishing the role to allocate more time to the company’s growing list of client projects and business development opportunities.

Jon joined 42 Technology over ten years ago; has been instrumental in driving its phenomenal growth, particularly in the industrial sector and into international markets; and he was one of the key team members behind the consultancy’s successful MBO in 2015.

Paul Bearpark brings over 25 years of electronics industry experience into the company and will help strengthen its in-house skills in key growth areas such as connected products and sensor-based systems.  His previous positions include being CTO at Digital Barriers developing unattended ground sensors for use in border and asset-protection applications, and eight years with Sagentia’s communications division.  He started his industrial career in the mobile comms sector, and in his free time helps to organise and participate in the increasingly popular Cambridge Repair Café network.

Jonathan Pallant joins with a track record of almost fifteen years in the development of embedded software for products and systems including several Bluetooth consumer electronics devices, and a remote wildlife imaging system for The Zoological Society of London.  He is also a founding member of the Rust Embedded Working Group which promotes the use of Rust programming language to help improve software safety and reliability for a wide range of embedded applications.

Jonathan’s activities outside of work include being elected to St Ives Town Council as an Independent in 2016 and again in 2018.  One of his key achievements as a councillor has been to help introduce the St Ives Community Fair where residents can meet with local community charities and other organisations, and with their local councillors to discuss any specific concerns about the town.

In his new role as head of new business development, Dr Alan Hart will take over 42 Technology’s sales development programme which has delivered steady growth over many years and the addition of several major European and US blue-chip clients, as well as many exciting start-ups and SMEs.

Alan’s considerable international experience includes hands-on technical consulting, business development and client-side positions, especially in the consumer products sector.  He was founding commercial director at Plumis – the domestic fire sprinkler company – where his achievements over a nine year period include bringing on board external investors, and co-inventing, patenting and commercialising the company’s multi-award winning Automist system.