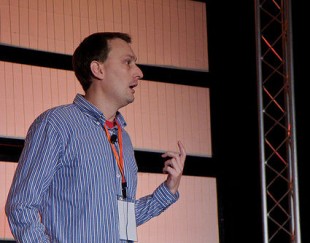 Neil Davidson is to leave his role as joint CEO of Red Gate Software, the company he founded with Simon Galbraith in 1999.

In a note posted on the Red Gate website today, he says that he plans to step down at the end of January 2013 to pursue other interests, including returning to full-time university study. He will, however, remain a major Red Gate shareholder and continue to sit on its Council of Advisors.

"I’m happy and proud of what I’ve been part of for the past 13 years, and I know that I leave Red Gate as a fantastic company of incredible people who are doing wonderful things. I’m also excited, because I strongly suspect that Red Gate’s best years are still to come. And I’m looking forward to watching them unfold," he said.

Red Gate is a Founder Member of Cambridge Network and Neil has been a staunch supporter of local technology companies, exemplified by his role as Chairman of the Network since 2008. His chairmanship is also due to end at the end of 2013 and he will help the Board find a successor.

Network CEO Claire Ruskin said:" Neil has lived at least one of his dreams, which was to create something spectacular in software development, and has long had other dreams he is keen to put more time into – a polymath with the opportunity to excel in so many areas.

"We are delighted that Neil extended his chairing of Cambridge Network, as we are due new Board members this year in any case, and the chair is due to rotate after consolidation and growth in 2012.

"I know we will still be seeing lots of Neil, as indeed will Red Gate in its use of an active Council of Advisors in place of a non-executive Board.”