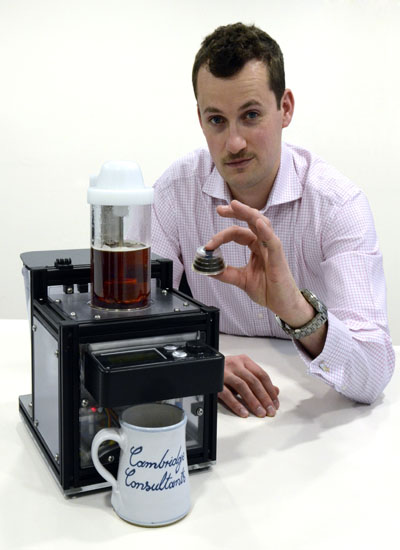 Innovative product development company Cambridge Consultants – which helped create the first round tea bag – is now taking tea making to the next level. It has designed a capsule-based tea-brewing system for the home that gives the perfect cup of tea at the touch of a button.

Tê is based on a traditional tea brewing method – but with the convenience of a disposable capsule and the ability to reduce brew time and increase drink quality. Cambridge Consultants used its beverage industry experience to analyse how tea can be brewed differently from the traditional teapot or tea bag method and incorporated its findings into a domestic tea system. The key is specially engineered recirculating pump technology which is incorporated in the simple capsule – for maximum convenience and minimum mess.

Edward Brunner, Group Leader of the Industrial and Scientific Group at Cambridge Consultants, said: “Whilst coffee systems have seen a significant amount of innovation over the last decade nothing has changed in tea brewing, leaving the tea drinker almost forgotten about. We saw a real opportunity to use our experience in the beverage industry to level the playing field and make a step change in this category.

“Thanks to our expertise in fluidic systems and functional packaging, and our dedicated dispense lab facilities, we have been able to finely tune the process needed to offer the most sophisticated brewing platform to bring customised, high-quality tea dispensing into the home.”

As well as giving the consumer control over the strength and flavour of their tea, the device brews the tea in just two minutes – half the time of a traditional teapot. And the cost of the machine is likely to be at the lower end of the price range for similar coffee devices – with the capsule cost mainly depending on the type of tea leaves selected.

Edward said: “Contrary to other tea machines on the market, this is based on a genuine tea-brewing process – rather than simply a ‘single-pass flow’ with fresh water. The technology process has been developed with black teas but has the potential to be used across a range of herbal and fruit teas, and other hot drinks.”

Cambridge Consultants will be demonstrating the Tê machine – together with other innovations such as the wireless automatic gear-changing bike – at CES 2013, January 8-11, in Las Vegas, South Hall, booth 26334.