Drug developed in Cambridge approved for treatment of multiple sclerosis 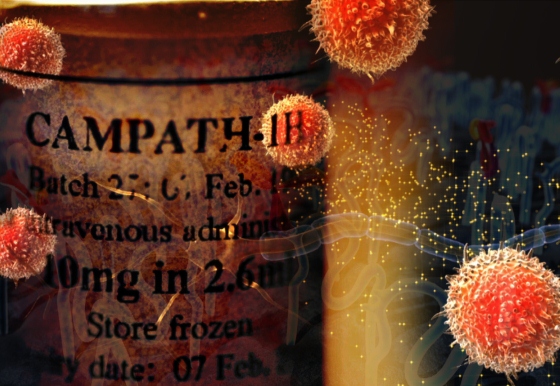 A transformational new treatment for multiple sclerosis (MS) - the result of over three decades of research in Cambridge - was approved today by the EU agency responsible for regulating new drugs. The approval concludes a nearly 40-year epic journey from fundamental research to discovery of an effective treatment for active relapsing MS.

This announcement marks the culmination of more than 20 years work, with many ups and downs in pursuing the idea that Campath-1H might help people with multiple sclerosis along the way. — Alastair Compston﻿

The European Medicines Agency (EMA) has approved the drug Alemtuzumab, to be known by the brand name Lemtrada and previously called Campath-1H (for ‘Cambridge Pathology 1st Human’), for the treatment of MS.

In recognition of the highly effective new treatment, the University of Cambridge has produced a video which explores the history of the drug, showing the many challenges as well as successes experienced during the course of this development.

In 1975 scientists Cesar Milstein and George Kohler working at the MRC Laboratory of Molecular Biology (LMB) in Cambridge invented the technology for making large quantities of an antibody targeted at one specificity, so-called monoclonal antibodies (work for which they were awarded the Nobel Prize for Physiology or Medicine in 1984). Building on this research, Herman Waldmann, Geoff Hale and Mike Clark from the University of Cambridge, with Greg Winter and Lutz Riechmann in LMB, produced the first monoclonal antibody for potential use as a medicine, Campath-1H (now known as Alemtuzumab), adopting the technique of ‘humanising’ these antibodies in order to minimise risk of the drug being rejected by patients.

Campath-1H was subsequently licensed for the treatment of chronic lymphocytic leukaemia. However, in the 1980s Cambridge clinical scientists also began to explore its use in autoimmune diseases, which occur when the body’s immune system mistakenly attacks healthy tissue.

In 1991, Alastair Compston (Professor of Neurology and Head of the Department of Clinical Neurosciences) began to explore the use of Alemtuzumab as a treatment for the autoimmune disease MS. He and Dr Alasdair Coles, also from the University, led the subsequent research to develop Alemtuzumab in partnership with Genzyme, a Sanofi company, which now owns rights to the drug.

Commenting on today’s decision by the EMA, Professor Compston said: “This announcement marks the culmination of more than 20 years work, with many ups and downs in pursuing the idea that Campath-1H might help people with multiple sclerosis along the way. We have learned much about the disease and, through the courage of patients who agreed to participate in this research, now have a highly effective and durable treatment for people with active MS if treated early in the course.”

Multiple sclerosis is an autoimmune disease in which the body’s immune system mistakenly attacks nerve fibres and their protective insulation, the myelin sheath, in the brain and spinal cord. The resulting damage prevents the nerves from ‘firing’ properly and ultimately leads to their destruction, resulting in physical and cognitive disabilities.

Alemtuzumab reboots the immune system by first depleting a key class of immune cells, called lymphocytes. The system then repopulates, leading to a modified immune response that no longer regards myelin and nerves as foreign. But in so doing, roughly one third of MS patients develop another autoimmune disease after Alemtuzumab, mainly targeting the thyroid gland and more rarely other tissues especially blood platelets.

Dr Coles’ research team is investigating how to identify people who are susceptible to this side-effect. Furthermore, they are testing whether this side-effect can be prevented, using an additional drug which boosts repopulation of the immune system, in a trial funded by the Moulton Charitable Trust and the Medical Research Council.

Dr Coles, from the Department of Clinical Neurosciences, said: “Alemtuzumab offers people with early multiple sclerosis the likelihood of many years free from worsening disability, at the cost of infrequent treatment courses and regular monitoring for treatable side-effects.”

“We are very pleased and proud of this outcome,” said Professor Herman Waldmann, who moved to Oxford University with his team in 1994 to work on the manufacture of Campath-1H, to understand its mode of action, and to apply the drug in a number of disease areas. “In particular, we have great admiration for the neurology team in Cambridge with whom we have worked on this project for so many years. Their commitment and focus has been exemplary, and this has been a good example of basic and clinical science collaboration at its best.”

Multiple sclerosis affects almost 100,000 people in the UK, 400,000 in the US and several million worldwide. Symptoms of the disease can include loss of physical skills, sensation, vision, bladder control, and intellectual abilities.

Although approved for use in EU, the drug has not yet been assessed by the National Institute for Health and Care Excellence (NICE) for the treatment of MS.