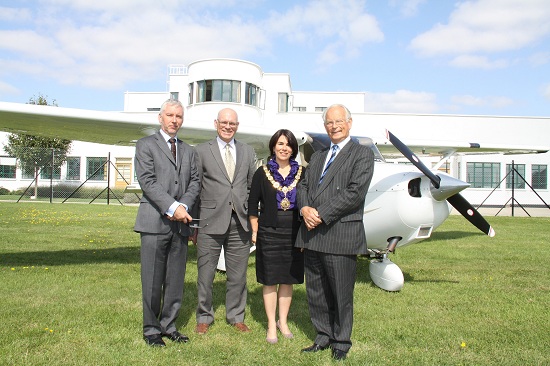 All three were taken for a flight in one of the Cambridge Aero Club’s Cessna 172 training aircraft, piloted by Group Support Executive, Terry Holloway, who also conducted them on a tour of the works.

Terry Holloway, Group Support Executive, said “It was a great pleasure to fly the Mayor, her husband and the Leader of the Council.  This annual flight remembers that the first flight in the United Kingdom in 1946, following the relaxation of wartime flying restrictions, was by the then Mayor of the City of Cambridge, Lady Bragg who was taken for a flight in one of the Company’s Tiger Moth training aeroplanes.  It’s wonderful to re-create this flight on an annual basis!”

Founded in 1909 with little capital as a chauffeur drive company in Cambridge, Marshall moved into the retail motor business in 1910, obtained Distributorship for Cambridgeshire in 1920 and entered the aviation business in 1929.  With all its growth funded by ploughed-back profits, the Marshall Group remains a privately owned family Company, with a turnover of over the Austin £1bn per annum.  The Group of Companies is chaired by the third generation of the Marshall family, and employs members of the fourth generation.  The Group currently employs just over 4,000 people working in the fields of aerospace engineering; design and manufacture of specialist vehicle applications, military mobility shelters and hospital surgical units; motor vehicle sales and after sales support; refrigerated transport sales and support; and property ownership and management.