Vince Cable: Cambridge, the most successful cluster of entrepreneurial business in Britain 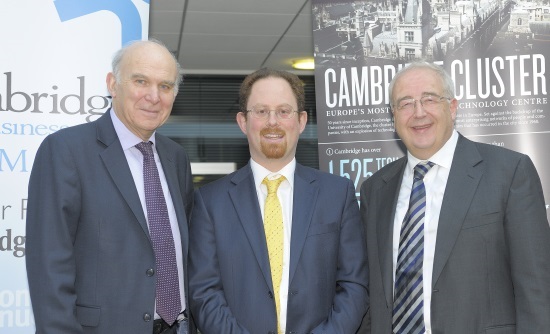 ‘Remarkable and unique’ is how Vince Cable described the Cambridge Cluster during a breakfast event yesterday (Monday) to mark the launch of Cambridge Business Week – a celebration of success in technology and innovation with a focus on the achievements and market-leading strengths of local companies.

This is the most successful cluster of entrepreneurial business in Britain – if there is a Silicon Valley in Britain, this is it.

Arriving with Cambridge MP Dr Julian Huppert, Dr Cable joined nearly 200 leading entrepreneurs and business leaders from the Cambridge community at the launch event at TWI, Granta Park. The ceremony marked at the start of a day-long tour of Cambridge businesses and the beginning of a week of awards presentations in recognition of outstanding local accomplishments.

Following an introduction by TWI Chief Executive Dr Christoph Wiesner, local figurehead Dr David Cleevely CBE took the stage to speak of the significance of the Cambridge Cluster to UK economic development, likening it to the ‘motor that drives the economy’ and highlighting the fact that the city celebrated a gross value-added per job, as a measure of productivity, some 30% higher than in London. Dr Cleevely called on the Government to strengthen its support for business so that Cambridge could continue to deliver.

In response, Dr Vince Cable spoke of the importance of ensuring that Government provided the right help for companies in order to keep Britain a world leader in the advancement of technology. Noting Government tax policy, R&D tax credits, schemes for businesses, and the need to invest in science and innovation, Dr Cable concluded: "This is the most successful cluster of entrepreneurial business in Britain – if there is a Silicon Valley in Britain, this is it."

TWI is the sponsor of the Cambridge News Business Excellence Awards, ‘Technology Engineering in International Markets’ category. The winner of the category will be announced during Cambridge Business Week and the award presented at King’s College on Thursday 21 March 2013.

TWI is one of the world’s foremost independent research and technology organisations, with expertise in solving problems in all aspects of manufacturing, fabrication and whole-life integrity management technologies.

Established at Abington, Cambridge, UK in 1946 and with facilities across the globe, the company has a first-class reputation for service through its teams of internationally respected consultants, scientists, engineers and support staff, whose knowledge and expertise are available to its Members as and when they require.

The company employs over 750 staff, serving 700 Member companies across 4500 sites in 80 countries. TWI also houses a professional institution, The Welding Institute, with a separate membership of 6000 individuals.