Addenbrooke’s staff send a Christmas gift to the Philippines 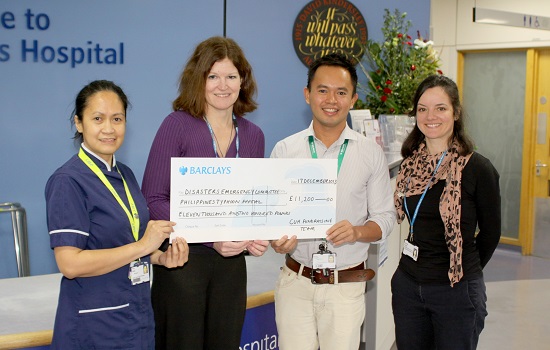 Staff at Addenbrooke’s and the Rosie Hospitals in Cambridge have raised thousands of pounds to support people affected by November's devastating Typhoon in the Philippines.

Hundreds of staff at Addenbrooke’s and the Rosie have family in the Philippines and many wanted to show their support for the disaster struck region. Over a month long period, they put on various events to raise as much money as possible, resulting in a grand total of £11,200.00.

Now, a clinical nurse specialist who was involved in the fundraising effort,   has said thank you to his colleagues for their support.  Regin Legaac, was one of many Filipino staff who rallied round in the wake of the storm which was one of the most powerful ever to reach land.

In an open letter to the Chief Executive, Dr Keith McNeil, Reg said “I would like to say a BIG thanks to all CUH staff  for their help".

The money will be paid to the Disasters’ Emergency Committee which will distribute the funds to the areas in most need.