A spoonful of storytelling helps the medicine go down 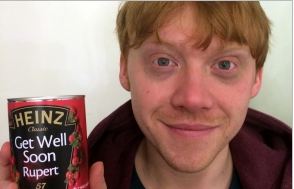 It has been shown that play and distraction can significantly improve a poorly child’s hospital experience and a new initiative from Starlight Children’s Foundation and Heinz will soon bring a big dose of fun and laughter to young patients at Addenbrooke’s Hospital.

During March, the Starlight Storytellers tour will visit hospitals and hospices across the UK and on Wednesday 5th March at 3pm it will arrive at Addenbrooke’s Hospital to do a wonderful storytelling performance for the children undergoing treatment on wards C2 and D2.

Created exclusively for Starlight by The Panto Company, the four actors will sing and dance along to a narrated collection of well-loved children’s stories for the young audience.  The performance will include family favourites such as Princess & the Pea, Charlotte’s Web and Three Little Pigs.

The Starlight Storytellers tour, which will visit 50 hospitals and hospices across the country, has been funded by Heinz’s ‘Get Well’ Soup campaign. During January and February the campaign asked the public to purchase personalised cans of ‘Get Well’ Soup, from its Facebook page, for loved ones feeling under the weather.  For every can of ‘Get Well’ Soup bought, £1 was donated to the charity to fund the Starlight Storytellers tour.  You can still buy a personalised can of Heinz ‘Get Well’ Soup for a loved one on Heinz Soup UK’s Facebook page.  Cans will be available for purchase until 31 March 2014;  £1 for each can sold will continue to be donated to Starlight.

Starlight is a national charity that grants wishes for seriously and terminally ill children and provides entertainment in hospitals and hospices across the UK.  This is the second year that the charity has partnered with Heinz on its ‘Get Well’ Soup campaign.

Christine Baines, Play Specialist at Addenbrooke’s Hospital  said, “We are really excited about the arrival of Starlight Storytellers.  We use play to help distract poorly children from the pain and anxiety that they might be feeling as a result of their illness and there’s nothing quite like a good story to capture children’s minds.  We are really grateful to Heinz and everyone that supported the ‘Get Well’ Soup campaign for this fantastic opportunity. ”

Neil Swan, Chief Executive of Starlight Children’s Foundation, said, “For many children, a trip to hospital can be very scary and Starlight aims to provide services that will entertain and distract young patients during their stay.  We are delighted to partner with Heinz for a second year on its ‘Get Well’ Soup campaign and we are sure that the Starlight Storytellers visit will bring some wonderful stories to life for the young patients at Addenbrooke’s.”

Bobbie Staden, Marketing Executive from Heinz adds “We’re very pleased to be working alongside Starlight once again to bring smiles to the faces of children in hospital. We’re certain that Starlight storytellers will provide them with lots of laughter, which is what all children want. It’s great to know that through ‘Get Well’ Soup Heinz fans can make a little difference to these children’s lives.”

Starlight grants once-in-a-lifetime wishes for seriously and terminally ill children, restoring the magic and fun of childhood and giving the whole family happy memories to share, whatever the future holds.

Starlight also creates entertainment in every hospital and hospice throughout the UK. Sick children go to Starlight parties, laugh their way through pantomimes, go out on Starlight Escapes, play games and watch films on the Starlight Fun Centre, and enjoy the toys and puzzles of the Starlight Distraction Box. Happy children respond better to treatment and Starlight helps children to forget about their illness and simply have a bit of fun.

For press enquiries about the Heinz ‘Get Well’ Soup campaign, please contact Eloise Keightley at Cohn & Wolfe on 0207 331 5379 or email Eloise.keightley@cohnwolfe.com