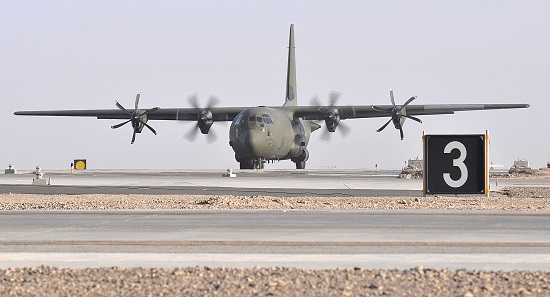 Marshall Aerospace and Defence Group has received a prestigious MRO Award in recognition of its exceptional response to an Urgent Operation Requirement (UOR), which was raised in April 2013 after a severe hailstorm hit Kandahar Airfield in Afghanistan and damaged five of the Royal Air Force’s Hercules C-130Js.

The ailerons of the aircraft were particularly badly affected, grounding the fleet, and subsequent investigations recorded an average of 2,000 strikes per airframe.

Awarded by industry publication Aviation Week & Space Technology, the MRO Award recognises how Marshall worked with the original airframe manufacturer, Lockheed Martin, and the UK Ministry of Defence (MoD) to establish quickly a dedicated team to undertake the extreme weather damage recovery project. Dubbed ‘Operation Weatherman’, the project enabled the damaged ailerons to be replaced on site in Kandahar and for one aircraft to return to operational duties within eight weeks of the hailstorm.

By mid-September, four of the five aircraft had returned to the Forward Fleet and resumed their flying duties, while the fifth underwent pre-planned depth maintenance at Marshall’s facilities in Cambridge.

In recognition of the exceptional response to the UOR, the RAF awarded Marshall a Chief of the Air Staff’s Commendation on 11th October 2013. It praised the efforts of all involved in Operation Weatherman: “This project has been a remarkable example of what can be achieved when the MoD works together with such capable Industry partners.” It also recognises Marshall’s ability to “…balance competing priorities through flexible planning and resourcing, willingness to innovate, and strong project management.”

Steve Fitz-Gerald, CEO of Marshall Aerospace and Defence Group, comments: “We are thrilled to have won this MRO Award. Responding to the UOR, and restoring a fifth of the RAF’s entire C-130 fleet to operational duties so quickly - and in secrecy - was possible thanks to the comprehensive processes and well-honed practices in place under our HIOS contract with the UK MoD.”

HIOS (Hercules Integrated Operational Support) is a form of Performance-Based Logistics (PBL) programme for maintaining equipment. However, unlike a traditional PBL programme, HIOS saves the MoD from dealing with multiple providers and focuses on the end objective, namely the RAF’s operational capabilities.

Marshall has supported the RAF’s C-130 fleet under the HIOS contract since 2006 and it is estimated to have saved the MoD approximately £170 million, making the C-130 one of the RAF’s most cost-effective transport platforms. Moreover, Marshall’s proven Integrated Operational Support methodology can easily be extended to other platforms.

Fitz-Gerald concludes: “We have been working with the RAF on C-130 since 1966. Operation Weatherman was completed under a true spirit of collaboration, as the recovery project was beyond the expectations of HIOS, comprehensive though it is. All stakeholders should be congratulated on a job well done.”

Marshall Aerospace and Defence Group (www.marshalladg.com) specialises in the conversion, modification, maintenance and support of military, civil and business aircraft, plus defence vehicle engineering and shelter manufacture. Headquartered in Cambridge, Marshall’s 800 acre site includes 1.2 million ft2 of hangar space plus the company-owned Cambridge Airport, which is capable of accepting aircraft up to Boeing 747 and Airbus A320 size. The company’s capabilities include engineering design, manufacture and test, systems integration, maintenance and product support, and the provision of personnel, training and advice.

Marshall Aerospace and Defence Group employees more than 1,750 highly trained personnel in Cambridge alone and has operated an apprentice training programme continuously since 1920. It also recently launched AeroAcademy in partnership with Kingston University.

Part of the Marshall Group of Companies, which employs more than 4,500 people worldwide and has a turnover in excess of £1.3bn, Marshall Aerospace and Defence Group has a presence on four continents, has exported its engineering capabilities to more than 30 countries and is working with 10 of the world’s air forces in relation to the C-130 platform.