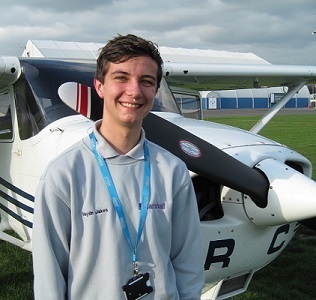 Seventeen year old Hayden Jakes, a first year apprentice with Marshall Aerospace & Defence Group, who lives with his parents in Newmarket, achieved a life-time ambition of flying solo in an aeroplane when he was sent off for his first solo in a Cessna 172 of the Cambridge Aero Club on Wednesday this week.

Hayden said: ‘It was absolutely amazing to be flying without somebody sitting beside me, although the penny didn’t actually drop until I nearly came into land that I was all by myself!  It really was an amazing experience.  I am so grateful to my instructor, Michael Skakles and the Cambridge Aero Club for the instruction they have given me.’

Cambridge Aero Club Managing Director Terry Holloway said: ‘I was thrilled and delighted to be present when Hayden completed his solo and it was an added bonus that our Group Chief Executive Officer, Robert Marshall, whose grandfather founded the Cambridge Aero Club in 1929, was also on hand to congratulate Hayden on this fantastic achievement of a first solo.’

Terry added: ‘Hayden completed an immaculate circuit and a very good landing and we now look forward to him completing his Private Pilot’s Licence.’

Image: Hayden beside his Cessna 172 aeroplane following his solo flight.


Notes
Hayden received his early education at St Louis Primary School in Newmarket before completing his education in Spain, where his father was working as a plasterer.  They have now moved back to the United Kingdom and Hayden is living with them in Newmarket.

Age is no barrier for learning to fly and it is possible to fly solo in an aeroplane at age 16, although Hayden is one of the younger members of the Cambridge Aero Club to fly solo in recent years. At the opposite end a number of older people are also learning to fly and last year a man, aged 100, received his first flight in an aeroplane of the Cambridge Aero Club.