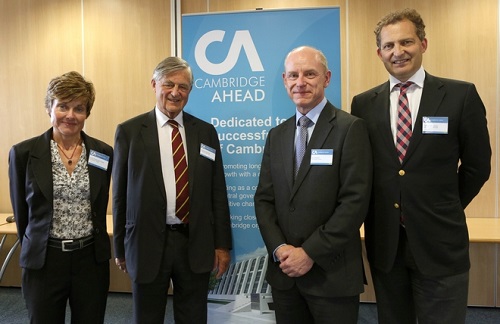 On Friday 20th June, Cambridge Ahead held a progress meeting at Cambridge Airport, courtesy of one of its Members, Marshall of Cambridge. A diverse range of guests were invited to hear an update on progress since launch in November 2013, and learn about some future plans. The invitees represented a range of interests within Cambridge including culture, education, sport, academia, business and local government.

Sir Michael Marshall CBE DL opened the meeting and emphasised the need for our existence, and also how we are working well with other interested parties to create a better future for the city region.

Ian Mather, Chairman of CA, talked about Cambridge’s excellence in so many key areas of business, education and health. He outlined the valuable influence our organisation has, citing our supporting role in getting a City Deal signed and our representations to government resulting in the decision to re-locate Papworth Hospital to a new building on the Cambridge Biomedical Campus near Addenbrooke's. Ian highlighted the need for carefully-planned and managed growth, emphasising that what we do now will impact future generations who will be unforgiving if we get it wrong.

Our CEO, Jane Paterson-Todd, spoke of the organisation going on a journey of discovery and that our approach has been consultative – seeking consensus between the key Cambridge interest groups and organisations is key to the city’s future.

Jane gave an update on our three ongoing projects, Quality of Life, Promoting Cambridge and Growth. On Quality of Life, the key announcement was that a survey conducted by RAND Europe, a member of CA and a not-for-profit Cambridge research institute, would be sent out on 23rd June to over 30,000 employees in a wide range of Cambridge organisations. This survey will not only help us understand how Cambridge people feel about their quality of life but also provide data for our two other projects.

On our Growth project, the key revelation was that two work streams are looking at developing an even more in-depth local forecast for growth from local businesses, and then using this information to analyse the various outcomes and scenarios and build strategic options on how to manage that growth. The third work stream is working in an unrelated area, namely exploring the demand and supply of commercial property.

On our final project, Promoting Cambridge, Jane revealed work is underway to update the existing databases of the Cambridge Cluster Map to produce a much-enhanced business insight tool. Developing an over-arching Brand for Cambridge is also planned, but this would not be before the key priority, namely working with our partners to launch an Inward Investment Agency (IIA) for the city region. This is planned for 2015 and the main purpose of this body would be to promote Cambridge nationally and internationally as a place to invest.

The final speaker was Robert Marshall, CEO of Marshall of Cambridge, who summarised the meeting and congratulated CA on its achievements in its mere seven months of existence. There followed a reception where guests could mingle and meet Members of CA. ﻿

See the full text of Jane Paterson-Todd’s speech here, the make-up of the Project teams here, and how the meeting was reported in the Cambridge News here.﻿