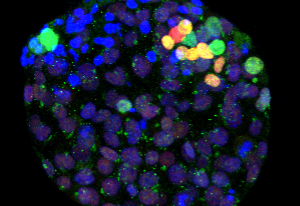 Scientists have successfully ‘reset’ human pluripotent stem cells to the earliest developmental state – equivalent to cells found in an embryo before it implants in the womb (7-9 days old). These ‘pristine’ stem cells may mark the true starting point for human development, but have until now been impossible to replicate in the lab

Our findings suggest that it is possible to rewind the clock to achieve true ground state pluripotency in human cells." — Austin Smith

The discovery, published in Cell, will lead to a better understanding of human development and could in future allow the production of safe and more reproducible starting materials for a wide range of applications including cell therapies.

Human pluripotent stem cells, which have the potential to become any of the cells and tissues in the body, can be made in the lab either from cells extracted from a very early stage embryo or from adult cells that have been induced into a pluripotent state.

However, scientists have struggled to generate human pluripotent stem cells that are truly pristine (also known as naïve). Instead, researchers have only been able to derive cells which have advanced slightly further down the developmental pathway. These bear some of the early hallmarks of differentiation into distinct cell types – they’re not a truly ‘blank slate’. This may explain why existing human pluripotent stem cell lines often exhibit a bias towards producing certain tissue types in the laboratory.

Now researchers led by the Wellcome Trust-Medical Research Council (MRC) Cambridge Stem Cell Institute at the University of Cambridge, have managed to induce a ground state by rewiring the genetic circuitry in human embryonic and induced pluripotent stem cells. Their ‘reset cells’ share many of the characteristics of authentic naïve embryonic stem cells isolated from mice, suggesting that they represent the earliest stage of development.

“Capturing embryonic stem cells is like stopping the developmental clock at the precise moment before they begin to turn into distinct cells and tissues,” explains Professor Austin Smith, Director of the Stem Cell Institute, who co-authored the paper. “Scientists have perfected a reliable way of doing this with mouse cells, but human cells have proved more difficult to arrest and show subtle differences between the individual cells. It’s as if the developmental clock has not stopped at the same time and some cells are a few minutes ahead of others.”

Cambridge Enterprise, the commercialisation arm of the University, is working with the inventors of this technology and its commercial partners.

The process of generating stem cells in the lab is much easier to control in mouse cells, which can be frozen in a state of naïve pluripotency using a protein called LIF. Human cells are not as responsive to LIF, so they must be controlled in a different way that involves switching key genes on and off. For this reason scientists have been unable to generate human pluripotent cells that are as primitive or as consistent as mouse embryonic stem cells.

The researchers overcame this problem by introducing two genes – NANOG and KLF2 – causing the network of genes that control the cell to reboot and induce the naïve pluripotent state. Importantly, the introduced genes only need to be present for a short time. Then, like other stem cells, reset cells can self-renew indefinitely to produce large numbers, are stable and can differentiate into other cell types, including nerve and heart cells.

By studying the reset cells, scientists will be able to learn more about how normal embryo development progresses and also how it can go wrong, leading to miscarriage and developmental disorders. The naïve state of the reset stem cells may also make it easier and more reliable to grow and manipulate them in the laboratory and may allow them to serve as a blank canvas for creating specialised cells and tissues for use in regenerative medicine.

Professor Smith adds: “Our findings suggest that it is possible to rewind the clock to achieve true ground state pluripotency in human cells. These cells may represent the real starting point for formation of tissues in the human embryo. We hope that in time they will allow us to unlock the fundamental biology of early development, which is impossible to study directly in people.”

Lead author Dr Yasuhiro Takashima, who was supported by the Japan Science and Technology Agency to carry out this research at the Stem Cell Institute, says: “The generation of our reset cells is the culmination of many years of work into the underlying biology of stem cells by our lab. Reset cells have opened the door to a new phase of research and we now need to carry out further studies to establish how our cells compare with others. We don’t yet know whether these will be a better starting point than existing stem cells for therapies, but being able to start entirely ‘from scratch’ could prove beneficial.”

Dr Rob Buckle, Head of Regenerative Medicine at the MRC, adds: “Achieving a true ground state in human pluripotent stem cells is seen as a significant milestone in regenerative medicine. With further refinement, this method for creating ‘blank’ pluripotent cells could provide a more reliable and renewable raw material for a range of cellular therapies, diagnostics and drug safety screening tools. This is likely to be a highly attractive prospect to industry and regulators.”

Adapted from a press release from the Medical Research Council.

Image: Expanded blastocysts were fixed and immunostained, demonstrating a presence of KLF4 and TFCP2L1 in the human inner cell mass, which can be detected in reset cells, but not in previously described human PSCs. Credit: Yasuhiro Takashima