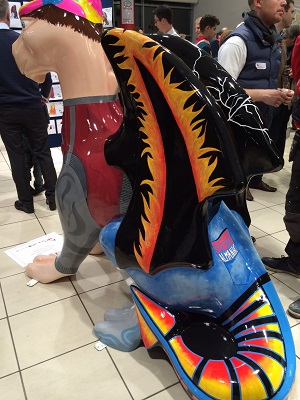 Aspiration Europe unveils Back To The Future inspired GoGoDragon in aid of Break Charity, designed by local photographer, Suzi Ovens.

Last week, Cambridge-based Aspiration Europe unveiled the GoGoDragon they have sponsored for next year’s sculpture trail in Norwich – which was created by local photographer, Suzi Ovens.

Suzi is a photographer based in Cambridge and London. She primarily shoots commercial, fashion and wedding photography, but enjoys other art and craft based activities outside of her work. She was also involved in the GoGoGorillas arts sculpture trail in Norwich in 2013, painting 'Earnest'.

Suzi says: “As a big film fan, I was very keen to create a design related to film in some way. I realised that in Back To The Future 2, Marty McFly travels forward to October 2015. 2015 also marks the 30 year anniversary for the first film of the trilogy, so to it made sense to me to make my design a tribute to the films. Dragon McFly wears a costume from the second film, and the design also includes the flames from the DeLorean on one wing, and the clock tower being struck by lightning on the other, with a flux capacitor between the wings.”

Suzi's photography work can be seen at:

GoGoDragons 2015 is an interactive arts sculpture trail bringing around 80 large painted sculptures and up to 100 mini school dragons to the streets of Norwich. The Presenting Partner is Norwich BID whilst Supporting Partners are Almary Green and Aspiration Europe (who also co-sponsor the GoGoDragon “Cavell” which features Norfolk scenery). The Education Partner is the Forum Trust.

Each of the Dragons is sponsored by a local business, group or trust and the sculptures will be sold off at an Auction on 1st October 2015. The proceeds of this project will fund the valuable work of Norfolk-based charity Break who support vulnerable children, young people and families across the East Anglia region – including Cambridgeshire.

GoGoDragon merchandise is being sold as a further charity fund-raising initiative, both via the website and through a pop-up shop opening in Norwich during December (where Dragon McFly will also be residing for a few weeks).

More information about GoGoDragons and Break can be found: