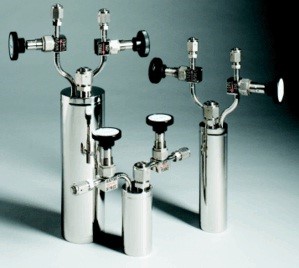 Atomic layer deposition (ALD) is a thin film deposition technique that is based on the sequential use of a gas phase chemical process. It used to be known as Molecular Layering and is often used in microelectronics; the majority of ALD reactions use two chemicals, typically called precursors.

These precursors react with the surface of a material one at a time in a sequential, self-limiting, manner. Through the repeated exposure to separate precursors, a thin film is slowly deposited.

Bubblers are used in the making of CVD/ALD processes and are liquid at room temperature; they are also used in powder form in certain cases. Most precursors are air and/or water sensitive and very flammable or pyrophoric in nature. Nevertheless, they exhibit good thermal stability and are storable for extended periods of time if well packed. For the CVD/ALD process, precursors are generally utilized directly from the package wherein they were supplied in order to avoid their handling issues. For this reason, the package must be considered as a component of the product.

Generally bubblers with internal dip tubes are utilised as a packaging option for liquids, while stainless steel cylinders with the suitable seals and fittings are utilized for gases. Typically, the transfer of liquid precursors into the reaction chamber is performed by bubbling a carrier gas via the container wherein they are stored at or less than room temperature.

Hydrogen is the most commonly used carrier gas; however, nitrogen or other inert gases can serve the purpose in certain cases. The use of catalysts is of paramount importance in delivering reliable methods of Silicon dioxide ALD.

The outstanding chemical, electrical, and optical properties of silicon dioxide have made it invaluable in science and technology