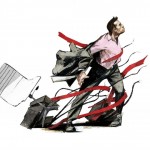 Andrew Hill in The FT reported last week that "disruption has become a feature of our times" and that Uber's founder, Travis Kalanick, is a "disruptive warrior".

Facebook, Uber and the iPad are examples of products and services that quickly came to be considered the latest ‘big idea’.  They disrupt their respective existing markets, boosting the fortunes of the organisations that introduced them and in some instances destroyed those of their competitors.  As Andrew Hill in The FT reported on 20 March: “Uber, whose founder Travis Kalanick is Person of the Year in the latest Boldness in Business Awards, epitomises this new generation of disruptive warriors”.

This kind of disruptive innovation comes from the remarkable minds of those who we at OE Cam have termed ‘Disruptive Talent’.  These are the innovators who see the world differently, finding new ways of doing things whilst rejecting the ‘tried and true’ solutions.  No organisation can afford to ignore this talent as those who don’t innovate at best stagnate.  A giant century-old organisation can be quickly brought to its knees by its inability to adjust fast enough to changing circumstances.

There is a definite need for disruptive talent, but recruiting and working with such individuals is often riddled with difficulties.  Those with brilliant minds often act differently to their peers, they challenge the status quo and can spot commercial opportunities where none had been seen.  These are the people who see possibilities where others don’t, who can’t tolerate inefficiency so find new or more effective ways of conducting business.  The benefit to organisations is tremendous, with operations streamlined and new routes to market opened.

Yet equally familiar are the stories of how difficult such personalities are.  Those same qualities that give some of these innovators the ability to think ‘outside the box’, also make them challenging to work with.  They are mavericks, independents and perceived as stubborn or even temperamental.  Therefore, organisations seeking to harness such ability, must be careful that they have recruited disruptive talent, not just those who are plain disruptive.

Traditional psychometrics seek to identify predictable behaviour, mitigating the risks associated with employment by ascertaining as best as possible how a candidate will perform.  However, those with disruptive talent can often act in ways that for the average candidate would suggest their unsuitability for the organisation…

An organisation may be required to tolerate and accommodate someone with ‘sharp elbows’ if that person behaves in that manner in the pursuit of excellence, but not otherwise.  A candidate’s past performance and track record might reveal some of this, but in-depth personality assessments will reduce the risk of bad hires and uncover more about what motivates each applicant and accurately predict future behaviour.  OE Cam’s research has found key indicators commonplace amongst successful disruptive talent, so identifying these in potential leaders, helps make choosing the right people easier.  It is for this reason that we have tailored our assessment approach to single out just such talent.

The need for a tailored assessment strategy when seeking to recruit disruptive talent exists because with such unique individuals, the conventional approach can misfire.

Traditional psychometrics seek to identify predictable behaviour, mitigating the risks associated with employment by ascertaining as best as possible how a candidate will perform.  However, those with disruptive talent can often act in ways that for the average candidate would suggest their unsuitability for the organisation.  For example, a gifted innovator may be rejected because their profile suggests they will not perform well on many conventional measures of success such as teamwork, empathy and diplomacy.

Such people are often the ‘outliers’ on multiple measures of behaviour and performance, which is why OE Cam’s psychologists combine psychological insight with a keen understanding of the sector you operate in, as well as the type of disruptive talent that would best suit your organisation.  It is through our unconventional interview process that patterns of behaviour, accomplishments, associated risks and development needs can be uncovered, allowing OE Cam to confidently go beyond simple psychometrics and recommend suitable candidates.

How do we Assess Disruptive Talent?

Alongside the deep psychological interview that we conduct, which aims to verify the personality profiles, we use a number of approaches to uncover further evidence of talent.  We use exercises that are not clearly defined, since this prevents good thinkers from cracking them too easily.  Ambiguity is intentionally built into these – to test how candidates deal with challenges cognitively as well as emotionally. Such exercises give them space to use their imagination without us telling them what to do.

We also test for influencing skills using exercises that require them to convince us of matters that are difficult to prove.  Part of the challenge is to encourage candidates to be disruptive, by seeing how they perform, think and create under pressure and ascertaining if any negative behaviours that were displayed were done so for the right reasons.

Finally, our experienced psychologists are trained to not rely on their initial instinctual reactions to such individuals, who can be either extremely charismatic or reserved to a high degree, but instead seek further evidence along the way.  It is this multifaceted approach that allows us to determine the depth and strength of disruption a candidate brings, both good and bad, as well as identifying areas for development and even risks of delinquency.

For further information about how OE Cam can help you identify and recruit Disruptive Talent, please contact Paolo Moscuzza on paolo.moscuzza@oecam.com

OE Cam is a specialist firm of business psychologists and organisation consultants. We help clients maximise the effectiveness of individuals, teams and organisations. We do this by building the capability of an organisation by developing their leaders, designing effective structures and engaging employees during change.