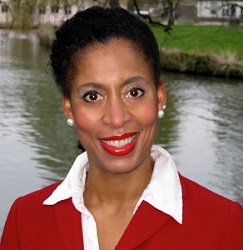 The Cambridge Science Centre marks two years of growth with the appointment of a new CEO. Cindy Forde joins from the BLUE Marine Foundation where she was Managing Director, heading up an international team dedicated to global protection of the world’s oceans.

An award winning communications professional with a background in corporate social responsiblity and sustainability, Cindy has worked around the world for organisations endeavouring to make positive change. These include JWT Global, United Nations Environment Programme, Aviva, Agilent Technologies as well as Cambridge-grown communication company Flag.

“I’m thrilled to be back in Cambridge," she explains, “innovation from this city inspires and influences the world. That’s what the Cambridge Science Centre is about - translating world class knowledge into a hands-on experience that has the power to delight and transform people young and old, as well as communities."

The Centre’s On The Road programme also enables a fully staffed version of the Science Centre to pop up in schools and other appropriate venues  across the UK. With the prototype phase complete it is now rolling out full steam, taking electrifying adventures in science to communities in Britain least able to access these opportunities.

The two-year old charity punches well above its weight. It has already reached over 50,000 people through innovative exhibitions, workshops and roadshows.

“It’s only the beginning,” says Forde “ that we’re becoming a major attraction in a city founded on knowledge is almost to be expected, what it means, though, is that we now need a permanent home in the city centre. That’s the next goal and we are looking for visionary funders and partners to help us achieve it. With that in place we can continue to serve the community and the wider world as well as the Cambridge economy. Once people find us, they stay almost fifty percent longer than the industry average for visitor attractions. We’ve got the magic. We’d like to put it at the heart of Cambridge so it works for everyone!”

Magic was much used to described the centre’s last major exhibition ‘Extreme Engineering’ that saw ordinary children transformed into builders of skyscrapers and defiers of earthquakes.  Kept tightly under wraps, this summer’s exhibition promises even more excitement with the organisers prepared to say nothing more than “it will be out of this world!”

The Cambridge Science Centre is an educational charity which hosts hands-on exhibitions, workshops, shows and talks to get the public excited about science and technology. Now the home of science has a home for science.