New ‘sat-nav’ scanner in use in CUH operating theatres 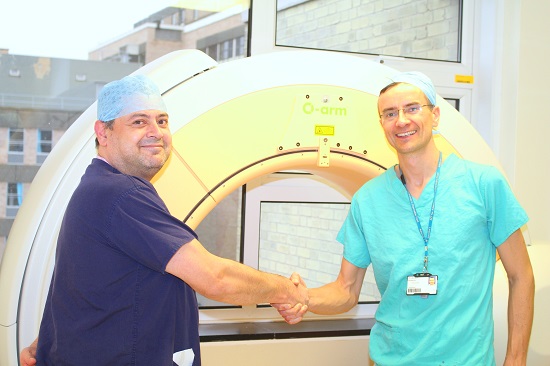 A new scanner that allows neurosurgeons to carry out ‘sat-nav’ spinal surgery is in use at Cambridge University Hospitals (CUH), helping to reduce complications and allow faster recovery for patients.

CUH consultant neurosurgeon Richard Mannion was the first clinician in the Trust to use the donut-shaped O-arm - which was part-funded by Addenbrooke’s Charitable Trust (ACT) - during an operation.

Mr Mannion said: “The scanner produces live high-quality 3D images of the spine that act like a sat-nav for the surgeon, allowing the insertion of screws in the back with pinpoint precision using keyhole surgery.”

This minimally invasive surgery means less blood loss, less chance of infection and a quicker recovery for the patient.

The first patient to have back surgery using the O-arm was someone Mr Mannion has worked with for over ten years – senior theatre nurse, Ullrich Bamberger.

Ullrich Bamberger, known as Ully to his friends and colleagues, needed complex spinal surgery at the same time that CUH became one of the first NHS hospitals to acquire the O-arm. Ully was struggling to walk more than 20 yards, which was having a huge impact on his life and work. The job he loves can require walking up to six miles a day as well as helping to position patients and assist surgeons in the operating theatre.

The surgery was performed last November and Ully was back to full duties at work within a few weeks. In fact, Ully was able to notice the difference as soon as he awoke from the surgery.

“After the surgery, I was able to go home the next day and all I needed was paracetamol during the day and paracetamol and ibuprofen at night,” Ully said.

“Before I had the surgery the pain was dictating my life – now I have my life back. I couldn’t walk farther than 20 yards without stopping because the pain was so incredible.”

Mr Mannion added: “Ully had a problem that was not entirely straightforward to fix. A nerve in the spine was severely squashed because the alignment of his spine was out of kilter. He needed the nerve to be decompressed, followed by fixation with screws and rods, to maintain the decompression for the rest of his life.

“You can do that using open surgery – and we’ve been doing it for a very long time that way and it works well. But using the O-arm allows us to do the same procedure keyhole with confidence, which is better for the patients and for surgeons.

“It takes 20 seconds to do the scan and the O-arm gives you superb quality spinal images with which to carry out the surgery. Without having to expose the spine, the screws can be placed through the skin almost as soon as the surgery begins.  Instead of having to make a big hole, you make two small skin incisions just to get the screws in and use the navigation to place the screws exactly where you want them to go.

“Before Ully or any other patient comes off the operating table, we are able to bring the O-arm back in to perform a final scan and make sure that the screws are perfectly positioned, and the pressure has been taken off the nerve. This gives the surgeon reassurance that their patients are going to have a great outcome and it is almost impossible for a screw to be misplaced.

“It’s a very useful bit of kit and I’m delighted we’ve got it at Addenbrooke’s.”

Ully had been a sceptic about these newfangled techniques but after he came round he told Mr Mannion: “This minimally invasive rubbish isn’t so bad, after all.”

Cambridge University Hospitals (CUH) is one of the largest and best known hospitals in the country. As well as delivering care through Addenbrooke’s and the Rosie, it is also:

About Medtronic, manufacturer of the O-arm

Medtronic plc (www.medtronic.com), headquartered in Dublin, is the global leader in medical technology - alleviating pain, restoring health and extending life for millions of people around the world.