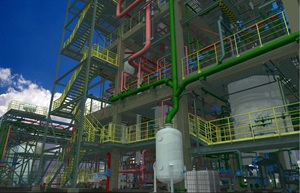 ‘We have experienced significant advantages by using AVEVA PDMS on EVONIK’s BOOST project, a new plant that will produce products for the cosmetics industry', explained Renato Marquesano, Engineering Systems, Progen.  ‘Previously we were working with 2D design software and increasingly encountered discrepancies, from inaccurate material lists to high numbers of clashes. This led to significant and costly problems in the construction phase.

‘On the BOOST project, a large and complex chemical plant with over 1400 piping lines, 1700 manual valves, 300 motors and 1350 field instruments, we have seen dramatic improvements. By using AVEVA PDMS we have been able to create higher quality design deliverables, collaborate more efficiently and greatly reduce rework, all of which have resulted in considerable time and cost savings.’

‘We are delighted to have supported Progen in the excellent work they have done on this major project for EVONIK,’ commented Evgeny Fedotov, Senior Vice-President, Global Head of EPC Sales, AVEVA. ‘We frequently see customers achieve these kinds of benefits by using AVEVA’s 3D modelling software.’

Progen originally started working with AVEVA PDMS on a major oil refinery revamp for Petrobras.  Owner Operators increasingly require their EPC contractors to use AVEVA technology on important projects for two reasons. First, because AVEVA software has become the industry standard for engineering and design, so Owner Operators know that all disciplines and stakeholders are working from the same data. And second, because the design efficiencies that PDMS brings are widely recognised to reduce, and in many cases eliminate costly and time consuming, rework.

Progen were so impressed by AVEVA’s technology that in 2008 they created an internal team tasked with maximising the benefits of PDMS across all of their projects. They have since used it across all their major construction projects, spanning the chemical, petrochemical, oil & gas and food processing industries.

About Progen Group
Founded 27 years ago, Progen is the leading Brazilian engineering consultancy and construction/project management company for the industry and the infrastructure sectors. With 100% Brazilian capital, Progen has a workforce of over 3.000 people spread over with offices in Brazil, Qatar, Malaysia and Mexico. Progen holds the lead in projects for mining and rail infrastructure segments and has increased its investments in other industry and infrastructure sectors. In 2013, Progen has achieved a turnover of R$431 million. Progen was recently the first ever engineering consultant company in Brazil to receive an equity investment from BNDESPar – the Brazilian Development Bank. This unprecedented operation highlights the relevance of Progen as the most prominent Brazilian company in the sector.