Little goes to waste at CUH... 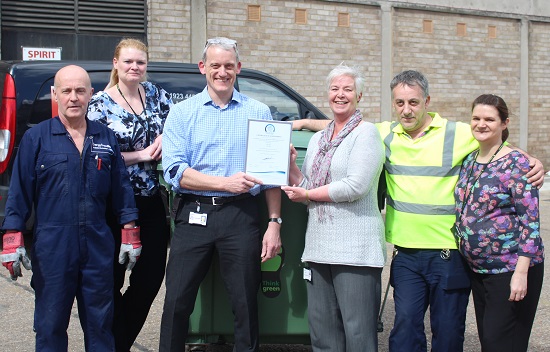 Cambridge University Hospitals (CUH) has been recognised for its first class work in waste management by one of the world’s leading independent experts in environmental sustainability.

The Carbon Trust awarded CUH a score of 89 per cent for its waste management, higher than any other NHS Foundation Trust.

That score is measured against organisations from around the world who have signed up for the Carbon Trust certificate – from governments, councils, universities, to supermarkets and other businesses.

Each day the 140-acre CUH site produces around 11 tonnes of waste which amounts to over 4,000 tonnes a year.

CUH has saved significant amounts of money by finding over 30 different routes for recycling, not least because many of them bring in revenue.

Even the clinical waste is not wasted – it’s carefully incinerated on-site and the heat is used to help warm the hospital, saving the Trust hundreds of thousands of pounds in gas bills.

Not ones for resting on their laurels, the Trust’s waste management team are now looking to further boost the re-use of equipment, devices and furniture. Diverting waste away from landfill (which costs around £100 per tonne) by recycling is great but it is even better to try and set up a re-use for it elsewhere.

Some medical equipment – all of which is redundant but still useable – is already sent abroad and the last two shipments have been sent to Syria as part of a relief package for the war-stricken country; and, the internal ‘Swap Shop’ that advertises no longer needed furniture and the like on the hospital intranet is ripe for expansion.

Angela Broekhuizen, Director of Estates and Facilities at CUH, said: “Quality waste management is a vital part of running the hospital but it often goes unseen. We knew the service was good and signing up for the Carbon Trust Waste Standard has really helped us to prove it.

“We are delighted to have been recognised as the leading Trust by an internationally-recognised organisation and this gives us a benchmark from which to push on even further.”

Cambridge University Hospitals (CUH) is one of the largest and best known hospitals in the country. As well as delivering care through Addenbrooke’s and the Rosie, it is also:
•a leading national centre for specialist treatment for rare or complex conditions
•a government-designated biomedical research centre
•one of only five academic health science centres in the UK
•a university teaching hospital with a worldwide reputation
•a partner in the development of the Cambridge Biomedical Campus