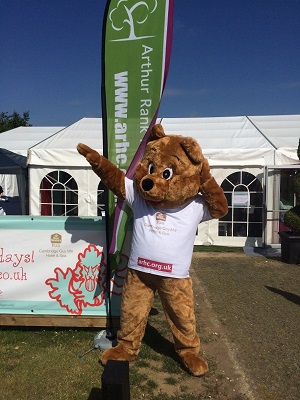 The feeling was mutual as children as young as one and adults in their sixties alike, paw-sed to hug, high five and take photos with him, in between bouncing on inflatables, playing musical statues, having their faces painted and tucking into delicious barbeque food.

Aisha Hunt, Community Fundraiser at Arthur Rank Hospice Charity, adds: “We were thrilled with the public’s response to Arthur Bear and how could you not love that cute furry face? We have big plans for Arthur Bear and want our hospice supporters and the children and grown-ups of Cambridgeshire to be a part of his future, so watch this (bear shaped) space!”

As well as having lots of fun throughout the year, Arthur Bear will also raise awareness about the hospice’s life care, counselling and support work for adult patients with life limiting illness. He is busy pre-bear’ing his diary for the year ahead alongside the team at Arthur Rank Hospice Charity, and would be delighted to include a visit to your school, event or be part of your fundraising plans for the charity. Become his friend by emailing your name, address and contact details to arthurbear@arhc.org.uk He also likes to collect birthday dates, especially after his own inaugural birthday on Sunday, so feel free to include the day and month of yours within the email!