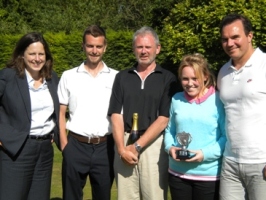 Catrin, from Granta Park’s national property agents Cushman & Wakefield, was presented with the trophy by Professor Andrew Wylie, the Head of the Pathology Department at the University of Cambridge. The overall competition was won by Histon Old Boys Team 2. As well as Catrin, the Granta Park team included Howard Westgate from Granta Park local agents Jeffersons Commercial, Wayne Hall, from creative agency Impact and Jez Smith, who runs the Granta Park gym

Taking place at Girton Golf Club, the event brought together members of the local scientific community and other business sectors to raise money for Campod (the Cambridge Fund for the Prevention of Disease), a charity based in the University of Cambridge Department of Pathology.

Says Roz Bird, Marketing and Asset Manager at Granta Park: “It was great to see Catrin winning this trophy for the Granta Park team. It was an excellent event, helped by glorious weather, giving participants the opportunity for an enjoyable day out, to network with other members of the local business community and support such a worthwhile cause.”