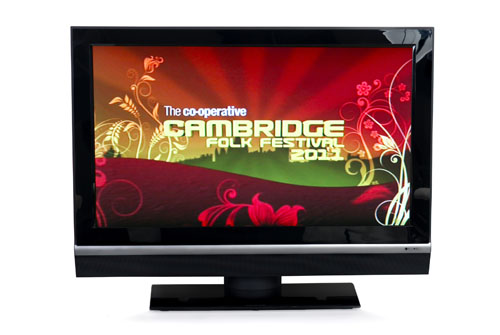 Cambridge and Peterborough-based design agency Adrenaline worked with The 2011 Co-operative Cambridge Folk Festival organisers to raise the profile of the event on Sky TV and on the festival’s website.

This year’s festival coverage, which was broadcast on Sky Arts, featured opening clips which were based on Adrenaline designs. These included the logo and animated visual elements of the website such as blossoming flowers and fluttering butterflies. The intro-captions have recently been screened on Sky Arts HD over several nights.

TV has become an essential medium for major world-class festivals to reach a global audience. For this year’s event Neil Jones, the Business & Marketing Manager at Cambridge City Council (Arts & Recreation), also commissioned Adrenaline to work with a video production company Absolution Films to launch a new service - FFTV. The web-based TV channel captured the real atmosphere across the Festival site and featured discussions with the fans and high profile interviews/performances with several of the artists. Adrenaline designed the branding for FFTV and integrated the functionality into the website which they were commissioned to design for the 2011 festival.

Neil was very encouraged by the reaction to the new media channel commenting ”this year we were excited by the launch of FFTV - a series of videocasts filmed at the Co-operative Cambridge Folk Festival over 4 days. We were delighted with the feedback from fans and we will be looking to enhance this extra dimension in future years”. FFTV can be experienced by visiting www.cambridgefolkfestival.co.uk

Adrenaline Creative is a full service agency with an infectious passion for branding, web/mobile design, copy writing, advertising and graphic design. Since the company was formed in 2001, the Adrenaline team has worked on creative projects for a diverse range of clients from blue chip brands through to more modest SMEs. Adrenaline's work can be viewed at adrenalinecreative.co.uk.