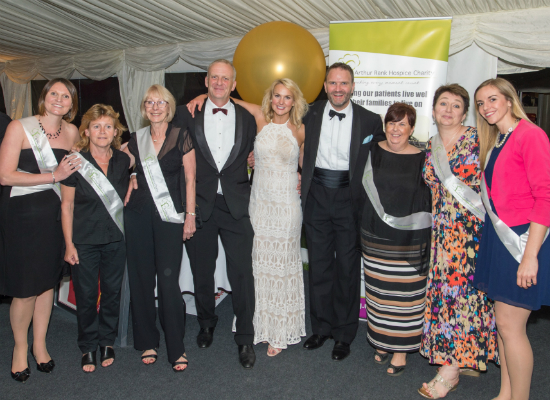 Two hundred and seventy guests were welcomed to Volac Park on 27 May, as Cambridge Rugby Union Football Club (CRUFC) raised £4975.50 for Arthur Rank Hospice Charity. The May Ball Committee were keen to mark a successful 2015/16 season during which they secured the National League 2S title and subsequently reinstated the event after a six year hiatus.

Guests were treated to a sparkling wine, a three course meal, live band and evening of dancing. £1200 was raised via a game of heads and tails (split 50/50 with the game’s winner), the ‘barrow of booze’ which made £820, and an auction - which included a Bear Grylls assault course package and a rugby coaching master class - adding £3265 to the figure. A further £271 from £1 per ticket sold took the grand total to just shy of £5000.

The Charity would like to extend its heartfelt thanks to CRUFC May Ball committee members Ben Peterson, Becky Gillick and Ross Jenyon who put on a superb evening, alongside the club’s wonderful players, volunteers and supporters who were kind enough to select Arthur Rank Hospice as the beneficiary of the event, and particularly those who attended the sparkling evening itself.

Donna Talbot, Director of Fundraising and Communications for the Charity said: “We were absolutely thrilled to be part of this special event. Ben, Becky and Ross really went the extra mile and it was wonderful to see all their hard work andcommitment come to fruition. The guests all had a superb time and they were so very generous. CRUFC is a community club and they really illustrated how passionate they are to give something back to people in our community and play a part in our future.”

Ben Peterson added: “In a year where the charity are trying to raise additional funds to complete the new facility, it seemed a natural fit to fundraise for the hospice. We have had a great year as a club and whilst raising funds to develop our teams and to maintain our facilities is always challenging, we want to ensure that we support people in our own community too and this was the perfect opportunity. We're a great club with great people and this definitely showed tonight. We would like to extend our appreciation to all those who bought tickets, donated prizes, took part in the fundraisers and also bid on the wonderful array of auction prizes.”

The funds raised on the evening have been directed specifically towards to the Hospice's £10.5 million new building appeal: £2.3 million is still needed to complete the Hospice’s new home, which is currently under construction at Shelford Bottom and will open to patients in late 2016.
Photos taken on the evening by their sports photographer and avid club supporter Chris Fell can be viewed in his May Ball photo album by clicking http://www.chrisfellphotos.com/ball2016