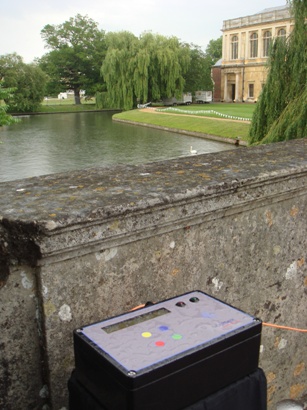 All workers and entertainers were provided with a MiFare RFID card to accompany their wristbands, which are of a different design to the guests’ wristbands.

Whenever anyone went through a choke point (in Trinity’s case, the bridge over the River Cam) support staff checked the wristbands and, if not a guest, the RFID card was scanned.  Associated with each card are the holder’s name (which can be checked with photo ID), their function within the Ball and whether they were allowed to pass through the choke point.  This was displayed on the RFID65 and several people were caught and financially penalised for misusing their presence.

Loss of income for the Ball

Reduced enjoyment for the real guests, as food and drink may run out, and queues may be longer

Reduced guest enjoyment if the workers are not serving

The system proved cost effective and Camdata hopes it will be used in 2010 in an enhanced form to help prevent guest gate crashers.  Double tickets at the Ball were £265 and over 2000 guests attended.  The RFID65 is fully water-proof, reads and writes a variety of RFID tags and has an embedded XP/Linux PC with wired and wireless networking.  There is a backlit LCD and four programmable keys.  Camdata has been developing and manufacturing rugged computer equipment for 24 years.