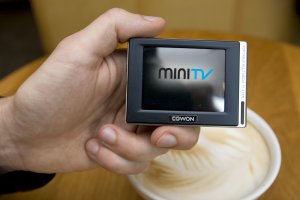 International DMB Advancement Group (IDAG) has added another six broadcasters to the IDAG initiative, bringing the count up to 13 members from 11 countries in Europe and Asia and significantly increasing MiniTV coverage.

TTP, the UK's premier technology & product development company and founder member of IDAG believes the initiative to promote Digital Multimedia Broadcasting (DMB) has reached critical mass.  TTP's Martin Orrell, general manager of media technologies said "The addition of six new broadcasters to the IDAG initiative is fantastic news.  As the availability of TV and Radio content grows, more and more people will be able to enjoy the benefits on portable devices."

IDAG was formed to help create a bigger market across many countries for MiniTV receivers by focusing on content, services and business models.  The MiniTV technology enables users to have freedom of choice when it comes to TV programs and receivers.  The lack of this has restrained other services in the past but is a major aim for IDAG.

The group met during IBC in Amsterdam and decided to accept six new members from five countries.  IDAG is currently in talks with major handset manufacturers, mobile network operators and pay service technology vendors to enhance the current free-to-air services and expand the offerings.  MiniTV services launched by IDAG members will cover a population of more than 120 million people by the end of 2010, and a lot more when known plans in a number of countries are executed.

“The market is expanding at a very high speed as MiniTV helps prevent both viewers and broadcasters from self proclaimed gatekeepers and makes the services on offer as accessible and user friendly as possible.  This approach is being appreciated by a steadily increasing number of broadcasters and operators” says Gunnar Garfors, President of IDAG.  He is also CEO of NMTV, one of the members.

MiniTV is broadcasted TV and radio plus additional services to all kind of portable devices (i.e. navigation units, PMPs, mobile phones, USB sticks, etc.).  Functionalities like on demand content, interactive shopping, live traffic information, personalized advertising and voting in TV shows are supported by certain receivers.  MiniTV uses a distribution technology called DMB (Digital Multimedia Broadcasting which includes DAB, Digital Audio Broadcasting, and DAB+) and has already been launched in Norway where 6 TV channels and 15 radio channels are on offer for free.  MiniTV is also being tested in some IDAG countries while others are launching in 2009 and 2010.  More companies are expected to join IDAG the next year as DMB is gaining popularity around the globe as a cost effective, flexible and robust technology.

Please visit http://bit.ly/12VicD for a selection of photos free to download and use with this article.