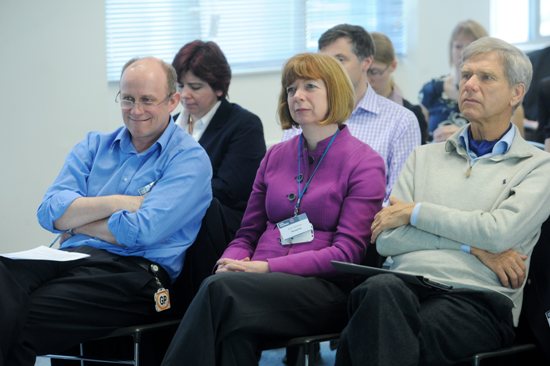 The first Cambridge Awards Week has been hailed as a great success with many people taking part in networking and sharing of ideas in support of the two major business awards ceremonies, the 'Cambridge News' Business Excellence Awards and 'Business Weekly' Awards.

Said Roz Bird of Granta Park, who was instrumental in organising, hosting and sponsoring events during the week. “There was an incredible atmosphere all week from the launch breakfast at Granta Park onwards. The week not only provided the business community with the opportunity to celebrate successes at the two awards ceremonies but also to network and make new contacts through ’engineered serendipity’ - initial chance encounters that over time become new partnerships, new developments, new sectors of R&D and new opportunities for commercialization that could very well lead to future successes to celebrate.”

Cambridge Awards Week’s key supporters were also delighted. Said Harriet Fear: “One Nucleus was delighted to be a pivotal supporter of Cambridge Awards Week. The highlights of the week were the two fantastic Awards dinners hosted by Business Weekly and Cambridge News – both recognising the excellence of entrepreneurship and business in the Cambridge area. Long may the eyes of the world remain on this incredible cluster.”

“We are most pleased to have been involved in this important week along with our User Experience SIG,” said Soraya Jones, CEO of Cambridge Wireless. “This event brought speakers and delegates from across the UK to discuss user expectations in the technology industry, how they have been met seamlessly, and what the future trends are. It is refreshing to see brilliant minds from all over the UK gather in Cambridge to shape the industry”.

Claire Ruskin, CEO of Cambridge Network, said “We had members winning prizes, which is always good, but perhaps most importantly we celebrated a large number of companies who spend the year working hard, creating and selling valuable products and creating employment through their success.”

Launching the event at TWI’s headquarters at Granta Park, Charles Cotton of Cambridge Phenomenon  said: “This is an amazing week of celebrations and I hope it will become a feature of the Cambridge calendar in the coming years,”

The launch was followed by a talk from TWI’s Norman Stockham about innovation in joining technologies and recent developments in advanced engineering processes and their applications. He illustrated how the continued development of electronics interconnect and packaging technology has enabled the miniaturisation of products such as mobile phones and medical implants such as heart pacemakers.

Also on Monday wind energy opportunities for UK companies were on the agenda at the inaugural meeting of Cambridge Cleantech’s wind energy special interest group, where delegates learnt that these were to be found in the supply chain rather than in manufacturing. Chris Parkhouse from specialist professional services firm Deyton Bell said the wind energy industry must be seen as a global industry, but with a western focus. “Most people talk about turbines but the UK is a leader in small wind – 60% of which is exported across the world.”

On Thursday Cambridge Wireless looked at  ‘Improving the User Experience in the next decade’ along with Philips Research and Granta Park, which focused on how audience participation with technology will focus on emerging lifestyle scenarios, and the methodologies by which new technologies can match their users' needs and expectations to provide an intuitive and satisfying user experience.

On Thursday and Friday Cambridge Network's Corporate Gateway offered delegates an individually crafted programme of meetings with leading University of Cambridge researchers and new technology companies. “The event raised interest internationally and we had visitors from different regions, including a group of 30 entrepreneurs from Spain, looking at how links with Cambridge could work for both countries,” said CEO Claire Ruskin. The group, from the Canary Islands Institute of Technology, attended many of the events and also took part in two days of talks and seminars organised by Enterprise Europe Network East of England and Cambridge Studies as part of the International Entrepreneurial Bridge Spain to UK. Events covered the Cambridge Phenomenon, doing business in the UK, opportunities to meet representatives from UK Trade & investment and various masterclasses.

On Friday Partnering with Neusentis, an entrepreneurial Pfizer research unit at the forefront of the new pharma R&D model, brought together key players across academia, the NHS and industry for a morning of discussion and exploration into partnership opportunities within the UK’s life sciences industry hosted by Neusentis; Pfizer’s specialised unit at the vanguard of research into pain and sensory disorders and regenerative medicine.

Said Dr Ruth McKernan, Neusentis Senior Vice President, Pfizer and Chief Scientific Officer:  “As a hub for the UK life sciences industry, Cambridge is at the heart of biomedical excellence. Proximity to the rich diversity of academics and biotech companies in this area and the South-East helps us at Neusentis to build meaningful collaborations and accelerate the development of new medicines to improve patient outcomes.”

Friday also saw two wrap up sessions, one with the aim of helping delegates make the most of the week and the other about de-stressing after a busy week. The Camyoga de-stress workshop helped with ways to cope including breathing exercises and meditation while Smart Working or Engineered Serendipity? Knowledge Management in practice hosted by One Nucleus and run by RiverRhee Consulting was about making more of the contacts people had made during the week, introducing participants to some simple but effective tools that they could use to accelerate and enhance their conversations.