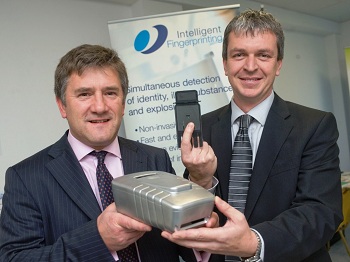 Angel investors are invaluable for bridging the ‘valley of death’ between seed corn funding and institutional investment, according to Prof Andrew Stewart Coats, Norwich Research Park CEO. Entrepreneurs, scientists and technologists are being given the opportunity to meet business angels at the next Venta meeting on 26th April 2012.

“Venta provides an opportunity for scientists and others with a business idea to gain the ear of the investment community,” explains Prof. Coats who will be chairing the next event following on from last November’s inaugural Investor Day. Intelligent Fingerprinting, one of the businesses pitching at the last event has just announced it has gained all the funding it needs to commercialise its new product.

One of the company’s early supporters is George Freeman, MP Member of Parliament for Mid-Norfolk and a life sciences advisor to the Coalition Government. George warmly supports Venta, he says:

"To unlock the potential of the Norwich cluster we need a more active early stage investment network, particularly involving 'angel' investors who can recycle experience and expertise to help new companies avoid the usual pitfalls on the road to successful commercialisation. Venta is an important vehicle for achieving that."

Selecting the right type of investor for your business is important as they can provide not just financial investment, but also specialist knowledge, and priceless access to influential contacts. This has been the experience of Intelligent Fingerprinting. Business development manager Paul Yates comments:

“It’s very hard to put your finger on a single thing that secured you funding, it’s about doing a whole range of things that raise the profile of the company and attending Venta was a key part of an intensive 3 month period of  raising funding and PR, a chance to meet with local business angels and other investors.

“The good news is that since Venta we have secured the funding we need to commercialise the product we had on display for the first time at the event.

“We have secured the funding that we required from a consortium of US private investors.  At the end of last year we had a lot of plans that were ‘pending’. Now we are able to accelerate commercialisation of the product, we have moved into the Innovation Centre on the NorwichResearchParkand will be recruiting new scientists.”

Mark Donaldson, who represented Atlantic Healthcare at the last event, says that Venta is a fantastic opportunity for early stage companies and that it has filled a gap in Norfolk. The company has raised £375k of the £500k of funding required to expand European revenues, to take it into profit and to be able to complete US out-licensing.  In his experience the finance is out there for good propositions and strong management teams.

“My advice to businesses is that you need to be well prepared. The event was well attended, and word of mouth and a good profile is vital when you are fundraising.”

Venta aims to build a diverse funding and investment community that will nurture innovative, high growth companies. The Norwich Research Park benefits from the ICENI seedcorn fund, which has supported a number of successful spinouts and also the Low Carbon Innovation Fund, which provides equity investment through Adap+.

Angel investors complement these activities and can also bring experience, which is invaluable to early stage companies. April’s event is also supported by The Cambridge Capital Group who were instrumental in starting the Venta initiative.

The UK research base is second in the world for excellence and the UK is the most productive country for research in the G8, however at a recent BIS strategy meeting Professor Sir Adrian Smith from the Foundation of Science and Technology said that the UK risked being left behind by emerging countries that recognised that innovation was an essential contributor to economic growth.

He said that although only 6 percent of UK companies are high growth they account for 50 percent of new jobs created. All are innovative but over half rely on interactions with universities for their research and development. Professor Coats says these findings represent a huge opportunity for the Norwich Research Park – which has a wealth of commercially relevant intellectual property – and for the regional economy.

“We have the intellectual environment that will encourage ‘spin-ins’ as well as ‘spin-outs’ and are building the facilities to help them grow. I am looking forward to meeting entrepreneurs with a diverse range of interests at the Venta meeting.”

Science-based companies requiring investment can apply to present at Venta – there are full pitching slots and also short 2 minute elevator opportunities – more details are available from John Irving at venta@nrpic.com.

Applications should be made by 2nd April, more details www.norwichresearchpark.com.

The first private angel investment group in Cambridge - investing in technology start-ups across the UK&#039;s Golden Triangle of Cambridge, London and Oxford for over 18 years.