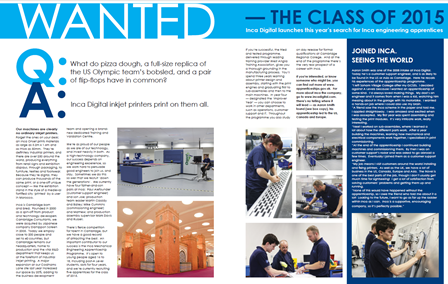 Q: What do pizza dough, a full-size replica of the US Olympic team’s bobsled, and a pair of flip-flops have in common?

A: Inca Digital inkjet printers print on them all.

Our machines are clearly no ordinary inkjet printers.  Forget the ones on your desk;  an Inca Onset prints materials as large as 3.2m x 1.6m and as thick as 50mm.  They’re definitely industrial printers, and there are over 250 around the world, producing everything from retail signs and exhibition displays, through packaging, to furniture, textiles and footwear.  Because they’re digital, they can produce thousands of the same print, or a one-off unique concept — like the exhibition stand in the style of a medieval fortified city ‘printed’ by a user in Morocco.

Inca is Cambridge born and bred.  Founded in 2000 as a spin-off from product and technology developers Cambridge Consultants, we were acquired by Japanese company Dainippon Screen in 2005.  Today we employ close to 200 people and sell to 40 countries, but Cambridge remains our headquarters, home to production and the vital R&D department that keeps us at the forefront of industrial inkjet printing.  A major expansion at our Coldhams Lane site last year increased our space by 20%, adding to the business development team and opening a brand-new dedicated Training and Validation Centre.

We’re as proud of our people as we are of our technology, and invest heavily in both.  As a high-technology company, our success depends on engineering excellence, so we work hard to persuade good engineers to join us, and stay.  Sometimes we do this so well that we recruit ‘down the generations’.  We currently have four father-and-son pairs at Inca:  Paul Alefounder (customer support engineer) and son Joe; production team leader Martin Cassidy and Bailey; Mike Cummins (commissioning engineer) and Matthew; and production assembly supervisor Mark Davis and Russell.

There’s fierce competition for talent in Cambridge, but we have a good record of attracting the best.  An important contributor to our success is the Inca Mechanical Engineering Apprenticeship Programme.  It’s open to young people aged 16 to 18, including post-A Level students, lasts for four years, and we’re currently recruiting five apprentices for the class of 2015.

If you’re successful, the tried and tested programme, delivered through leading training provider West Anglia Training Association, gives you a thorough grounding in the manufacturing process.  You’ll spend three years learning about printer design and assembly, starting with the print engines and graduating first to sub-assemblies and then to the main machines.  In year four — designated the ‘Improver Year’ — you can choose to work in other departments, such as operations, customer support and IT.  Throughout the programme you also study on day release for formal qualifications at Cambridge Regional College.  And at the end of the programme there’s the very real prospect of a career with Inca.

If you’re interested, or know someone who might be, you can find out more at www.apprenticeships.gov.uk.  For more about Inca the company, go to www.incadigital.com.  There’s no telling where it will lead — as Aaron Smith found (see below), his apprenticeship led to the US, Canada and Europe.

Aaron Smith was one of the 2008 intake at Inca Digital.  Today he’s a customer support engineer, and is as likely to be found in the US or Asia as Cambridge.  Here he recalls his experiences of the apprenticeship programme.

“I left Soham Village College after my GCSEs.  I decided against A Levels because I wanted an apprenticeship of some kind.  I’d always loved making things.  My dad’s an engineer and it comes from when I was a kid, watching him messing about in the garage with his motorbike.  I wanted a hands-on job where I could also use my brain.

“A friend saw the Inca scheme in the paper and told me.  I applied straightaway.  I was amazed and excited when I was accepted.  My first year was spent assembling and testing the print modules.  It’s very intricate work, really interesting.

“Next I worked on sub-assemblies, where I learned a lot about how the different parts work.  After a year building the machines, learning how mechanical and electrical components work together, I specialised in print commissioning.

“At the end of the apprenticeship I continued building machines and commissioning them.  By then I was on customer support’s radar and was asked to go abroad a few times.  Eventually I joined them as a customer support engineer.

“My job means I visit customers around the world installing and fixing printers.  As well as the UK, we have a lot of business in the US, Canada, Europe and Asia.  The travel is one of the best parts of the job, though I don’t usually get much time for sightseeing!  I get a lot of satisfaction from solving customers’ problems and getting them up and running.

“None of this would have happened without the apprenticeship, so I owe the friend who told me about it a lot!  Looking to the future, I want to go as far up the ladder within Inca as I can.  Inca is a supportive, encouraging company, so it’s perfectly possible.”