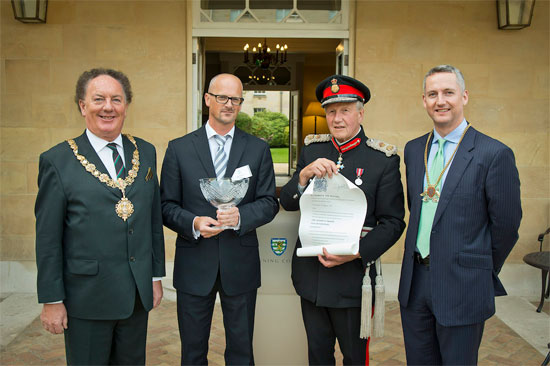 Cambridge Intelligence writes - We had the perfect afternoon for our Queen’s Awards ceremony. Thank you to everyone who came to celebrate with us!

We were delighted to be joined by friends, colleagues and Cambridge dignitaries last Friday as we officially celebrated winning a Queen’s Award for Enterprise in Innovation.

During a champagne drinks reception held in the sunshine on the lawns of Downing College, Sir Hugh Duberly KCVO, CBE, Lord-Lieutenant of Cambridgeshire formally presented us with the certificate and crystal bowl on behalf of the Queen.

During his speech, Sir Hugh commended us on our achievements so far, saying that the future success of the UK relied upon high-growth, international businesses like Cambridge Intelligence.

He also took time to praise KeyLines – the technology for which we won the innovation award – saying that he had even been able to personally recommend the toolkit during a visit to the Ministry of Defence earlier in the week!

The award was received by our founder and CEO, Joe Parry. Here is an excerpt from his speech, reflecting upon the company’s journey so far.

“We are at the heart of a beautiful Venn Diagram of buzz words: ‘Big Data’, ‘Cyber Security’ and ‘Data Visualisation’. Despite all the hype there is actually a huge opportunity at the intersection of this diagram, as well as in each of the segments. The UK government recognises this and I think this award recognises a strategic fit between what the UK is trying to be and what Cambridge Intelligence stands for.

But this award isn’t just about potential. It is about execution of that. Actually delivering products and services, finding customers and learning fast. In just three and a half years since our product launched, we have over 80 licensees, spread across 15 countries. We have input over £5M into the UK economy. It has been quite a journey so far.”

We would like to thank everybody who took the time to join us to celebrate our success. We hope you enjoyed the afternoon as much as we did!