Crop breeding: is it all in the genes? 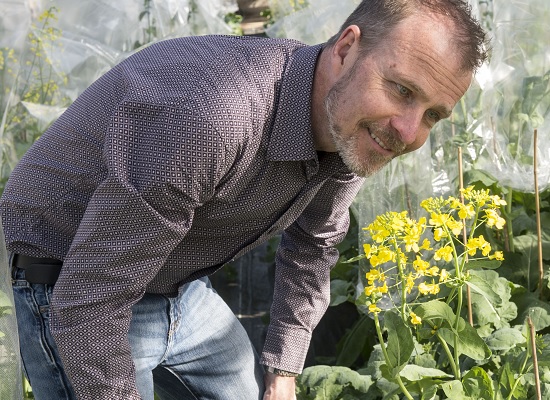 For over 10,000 years, farmers have selected crops they wanted to breed on their characteristics. The cereal crops with the longest ears were selected to increase yield and shorter stems to reduce lodging in bad weather.

The discovery of DNA gave the scientific basis for crop improvement. More recently some plant genomes have been sequenced and researchers are now discovering what genes control which processes, leading to new developments and techniques for crop breeding.

Professor Lars Østergaard, from the John Innes Centre, is researching the Alcatraz gene and other genes that regulate pod shattering in oilseed rape. He says: “In wild plants seed dispersal needs to be as efficient as possible to ensure success of the next generation. However, farmers want to maintain the seeds on the crop until harvest so seed dispersal was gradually bred out of cereals, such as wheat, barley and rice, over thousands of years.

“Oil seed rape is a recent crop, and until new strains were developed in the 1970s it was unsuitable for human consumption. Production has risen dramatically as it is an excellent rotation crop. However, the genes that promote pod shattering are still active.”

Prof Ostergaard and his team are trying to find out how these genes interact. He explains: “If the Alcatraz gene is completely abolished, the seeds can never escape! What we are trying to do is fine-tune the genes that regulate pod shattering so instead of wide dispersal, or no dispersal, the seeds are released at the optimal time.”

Chris Tapsell is from KWS, a global company that focuses on plant breeding. He says: “Breeding wheat is difficult as its genome is massive – over five times that of humans – so it hasn’t yet been fully sequenced. However, in crops where such sequencing data is available it is possible to more easily determine the genes that control a desired trait.

“We don’t yet have this information for wheat but what we do know is that some areas of DNA, called quantitative trait loci (QTL) are correlated to certain desirable features or phenotypes. The QTLs can be identified in the DNA sequence using molecular markers. If the markers are found in a particular plant this generally confirms that the desired trait is present.”

More recently, breeders have been studying a new tool that it’s hoped will further improve the efficiency of breeding and increase ‘Genetic Gain’ (the annual improvement in a trait such as yield). This new breed technique is called genomic selection. Molecular markers across the whole of the wheat DNA are used to access a specific trait and give individual breeding lines a predicted ‘Breeding Value’, which is then used by the breeder for selection purposes.

However, a vast amount of information is generated in this process and we need to make sure these predictions are robust. Chris says: “The quantity of data required to prove these links are accurate are huge and expensive to collect, requiring complex analysis. We still need to show if this is cost effective in terms of the benefit over current rapid breeding methods.”

Professor Lars Østergaard and Chris Tapsell will both be speaking about their work before the meeting takes on a ‘speed dating’ format allowing participants to discuss problems and solutions in relation to crop breeding.