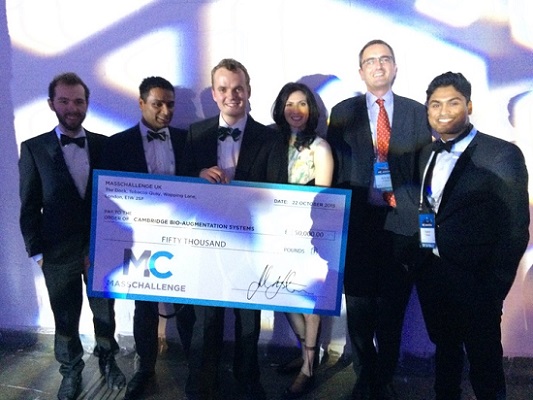 At the MassChallenge UK Awards, Cambridge Bio-Augmentation Systems, was named a 2015 winner by MassChallenge, the no-equity startup accelerator. CBAS is a medical devices company making a dedicated connector for amputated limbs to take the pain out of prostheses & give device choice back to the amputees that need them. Avidity-IP’s CTO Adrian Howson provided commercial, technical and regulatory mentoring, helping CBAS to win the top prize of £50,000.

“In the last four months, we made a phenomenal amount of progress and hit every one of the milestones we set for opening our seed round in November” said Cambridge Bio-Augmentation Systems Co-Founder Oliver Armitage. “Winning MassChallenge is great validation by the judges of our product market fit and positions us well to accelerate the pace of innovation in the bionics market.”

The MassChallenge model includes mentors who guide teams during the Accelerator and provide value as connectors, motivators and strategists. MassChallenge mentors are leading experts, entrepreneurs and business professionals.

Cambridge-based Avidity-IP is a firm of European Patent and Trade Mark attorneys.  Avidity-IP also retains a number of experienced development professionals to mentor or advise inventors and client organisations alike to optimise the potential and unlock the value of their creations.

Adrian Howson, Avidity’s CTO,  has spent over 25 years working for some of the area's foremost technical consultancies developing medical and pharmaceutical products and is currently supporting a number of startup groups.  He was recruited by CBAS to provide mentoring through the MassChallenge model.

In 2015, over 2,250 startups applied to MassChallenge accelerators in Boston and London. Cambridge Bio-Augmentation Systems was named one of 90 finalists to take part in MassChallenge UK accelerator, which provided mentorship, office space, a vast network and other resources during four months of acceleration. The programme concluded last week at the Awards Ceremony & Fundraiser where Cambridge Bio-Augmentation Systems took home the top prize of £50,000 of the £500,000 equity free cash award.

CBAS is developing the next generation of prosthetic connectors to reduce the cost of caring for amputees, remove the pain of wearing prosthetics & give amputees a wide choice of plug & play prosthetics. The product is an implanted medical device that inserts into the end of an amputated limb, crossing through the skin barrier to provide a permanent attachment site for any prosthetic. Importantly this allows patients fitted with the device to have neural control, and feedback from, any prosthetic they connect. CBAS is not only pioneering the biological technologies that allow the tissues of the stump to interface with their device but is also, for the first time, making the prosthetic connector an open standard that will be free to develop for by the bionics industry. In this way CBAS are setting a future standard of how technology will integrate with the human body and creating the “USB of prosthetic interfaces”.

MassChallenge runs startup accelerators designed to catalyse a global renaissance by connecting high-impact startups with the resources they need to launch and succeed. Anyone can apply to MassChallenge, with any early-stage startup, in any industry, from anywhere in the world. MassChallenge does not take equity or place any restrictions on the startups it supports.

With programs in Boston, Israel and the UK, MassChallenge provides entrepreneurs with mentorship, office space, education, access to a vast network, and other resources during four months of acceleration. MassChallenge awards over £1.5 million in non-dilutive grants to the startups demonstrating the highest impact and highest potential. A nonprofit organization, MassChallenge is funded by corporate, public and foundation partners. To date, the 835 MassChallenge startups have raised over £720 million ($1.1 billion) in funding, generated over £340 million ($520 million) in revenue and created over 6,500 jobs. For more information, visit www.masschallenge.org.

Avidity IP is a firm of patent and trade mark attorneys with offices in Cambridge, Stratford-upon-Avon and Reading.