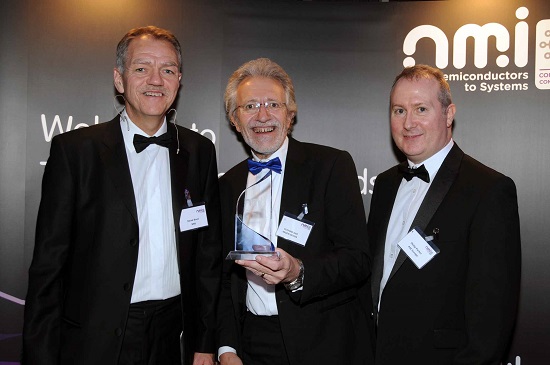 Argon Design has won the prestigious Innovation of the Year category of 2015 at last night’s NMI Awards. The awards celebrate the year’s key electronics innovations, people and companies from across the UK and Ireland. It has been run as an annual event since 2001.

This award is given to the company that can demonstrate a significant business impact through innovation. This can cover any aspects of innovation whether in business process, manufacturing, service provision or product development.

In presenting the award, NMI CEO Derek Boyd said: “A very strong category this year with several contenders from across all of the NMI communities. In the end though Argon Design were the clear winner after impressing all of the judges with ‘Argon Streams’, a product that offers comprehensive testing of video decoders. Video decoding is a fast growing field which is driven by the huge increase of internet video traffic. The product provides comprehensive testing but still remains extremely efficient which adds up to cost efficient test solution."

The full list of winners, in order of presentation, were:

The Manufacturing Site of the Year Award - XAAR

The Manufacturing Supplier of the Year Award - KMG Ultra

The Product of the Year Award - Cambridge CMOS Sensors

The University Research Group of the Year Award - University of Southampton

The Emerging Technology Company of the Year Award - PragmatIC

The Company of the Year Award - Plessey Semiconductors

Argon Design, based in Cambridge, UK, is a high technology consultancy with a successful track record in semiconductor design and embedded product development. With a history of complex IP and ASIC designs, including custom processors, video codecs and 2D/3D graphics engines, Argon Design has developed a video decoder verification solution called Argon Streams. Available for both the HEVC and VP9 standards, Argon Streams meets the demanding verification and test coverage needs of IP and Semiconductor developers.

NMI is the UK trade association representing the electronic systems, microelectronics and semiconductor communities. Its objective is to catalyse and accelerate the continual development of a sustainable and world-leading industry in the UK

NMI is a trading name of the National Microelectronics Institute, a not-for-profit organisation registered in Scotland, No. 17005.