Field labs give insights into blackgrass control and compost teas 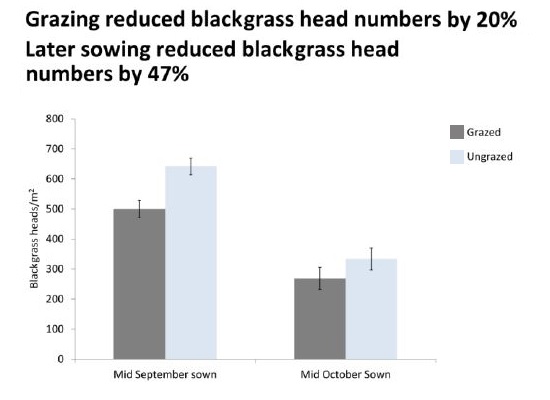 As the warm wet weather encourages winter-sown wheat to get away, concerns are being raised that blackgrass is also thriving. Liz Bowles, Head of Farming for the Soil Association, comments that field labs – which provide an opportunity to experiment with different cultivation techniques on a farm scale – are offering farmers new insights. She will be discussing results from two such trials at the Agri-Tech East Pollinator meeting ‘Pipettes and Ploughs’ at Rothamsted Research on 23rd February 2016.

Bowles explains: “One traditional way to control weeds in cereals was to graze winter cereals with sheep in the winter or spring. To see what impact different sowing dates and grazing would have on a farm of today, we decided to trial this approach in one of our field labs as part of the Innovative Farmers initiative; the results have been very interesting.”

Innovative Farmers is the second phase of the Duchy Future Farming Programme and is being coordinated by the Soil Association with LEAF, IfA and ORC. The programme is creating a network of farmers involved in on-farm testing. Two of the projects in the east of England are ‘Cultural Methods to Control Blackgrass’ based on Shimpling Park Farm in Suffolk, and ‘England Compost Teas Group’ which includes Whitehall Farm in Cambridgeshire.

Bowles continues: “It is thought blackgrass has become increasingly problematic with the decline of mixed farming and a dominance of winter sown-cereals. John Pawsey at Shimpling Park Farm is an organic arable farmer and he was keen to run a trial to see if introducing sheep into the rotation could control this weed.”

Dr Stephen Moss of Rothamsted Research, an expert on non-chemical control of blackgrass, advised the experiment which involved a group of farmers.

Preliminary results suggest that early sown (September) wheat had a higher incidence of blackgrass than a later sowing (October). Delaying sowing reduced blackgrass head numbers by 47 per cent. Furthermore, grazing with sheep in the spring reduced head numbers by an additional 20 per cent. The grazed wheat was found to be shorter with a reduced canopy cover.

Bowles will be discussing further results from the field lab at the Agri-Tech East meeting along with those from the ‘Compost Tea’ trial. She says: “Compost teas have been used on the continent for many years and are thought to increase the soil’s micro biota, but there is little scientific evidence to support this.

“The idea is that, supported by a wider range of micro biota, the plants are healthier and have greater resilience to disease. We wanted to find out whether the application of compost teas would have a positive impact on soil health and productivity. We have measured fertility using routine P, K, MG, N tests along with testing for the major groups of soil microbiota.

“We are currently writing up our results and plan to share these with the audience at the meeting in February.”

Bowles will be joined at the Pollinator meeting by Ian Pigott, managing director of Thrales End Farm, which has been running a farm scale trial for many years, and also plant pathologist Prof Jon West of Rothamsted Research. There will be an opportunity to hear about the findings of the two trials and to discuss the concept of a field lab.

Dr Belinda Clarke, Director of Agri-Tech East, says that bringing the science into the field is beneficial not just for the farmers but also the researchers: “There are considerable variables in the field that are not apparent to scientists working under perfect conditions in the lab. To increase resilience in crops we need more opportunities to experiment with a wider range of approaches.

“Hearing from both the farmers and the scientists at this meeting will be very interesting.”

For more information about “Pipettes and Ploughs: Taking the Lab to the Field” see the Agri-Tech East website www.agritech-east.co.uk