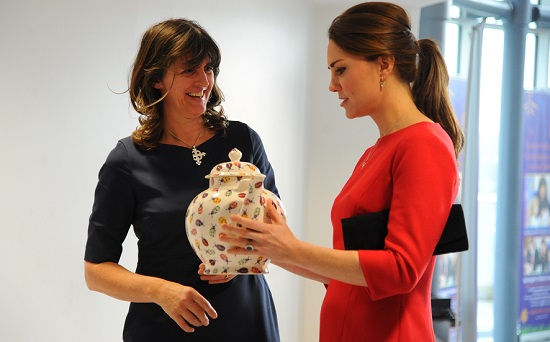 Several lots have been secured so far, with more coming in. A pair of Strictly Come Dancing shoes signed by dancer Karen Clifton will be going under the hammer, an England Rugby top signed by Leicester Tigers and England scrum-half Ben Youngs and his brother Tom Youngs, VIP tickets to see Guys and Dolls at the Phoenix Theatre, London and a cricket bat signed by the England Cricket World Cup 2015 team.

The iconic pottery designer and manufacturer, Emma Bridgewater teamed up with EACH in 2014 to create two exclusive mugs to raise funds for the charity’s nook appeal which aims to raise £10 million to transform children’s palliative care across Norfolk. The partnership was encouraged by the charity’s Royal Patron Her Royal Highness The Duchess of Cambridge. The exclusively designed mugs and two one-gallon teapots were launched to EACH supporters and Her Royal Highness at the charity’s nook appeal launch event in November 2014 – and it is one of these teapots which will now be auctioned off to raise valuable funds for the charity.

EACH cares for children and young people with life-threatening conditions across East Anglia and is a lifeline to so many families at an unimaginably difficult time. This is the third year that EACH has run an online auction and hope that this year’s event will be even more of a success.

Other top lots include: a night’s stay at Flying Kiwi’s The Ship at Brancaster, a Lotus gift voucher for a Level 1 driving experience, VIP tickets for the Olivier award winning musical Sunny Afternoon at the Harold Pinter Theatre, a one-to-one lesson and tour at Macarons & More in Norwich and VIP tickets to The McOnie Company’s production of Jekyll and Hyde at the Old Vic.

Debbie-Lee Pinching, EACH Special Relationships and Events Manager: “We’re thrilled to be launching our EACH online auction with such a great selection of lots.

“We have many fabulous items up for grabs and experiences to suit all budgets so I would encourage everyone to keep an eye on the EACH auction page where we’ll be adding prizes as they come in. We are so grateful to everyone who has donated a prize to the auction and can still accept more.”

The auction opens for bidding at midnight on Monday 25th April and will run through to 8pm on Sunday 8th May.

EACH is still able to include new prizes so if you’d like to be involved by donating a prize, please contact Debbie-Lee Pinching on 01223 205192 or debbielee.pinching@each.org.uk.

For more information about EACH, including forthcoming events and how you can help raise funds, visit www.each.org.uk

Image: HRH The Duchess of Cambridge with Emma Bridgewater at the nook appeal launch in November 2014 where the design in aid of EACH was launched.