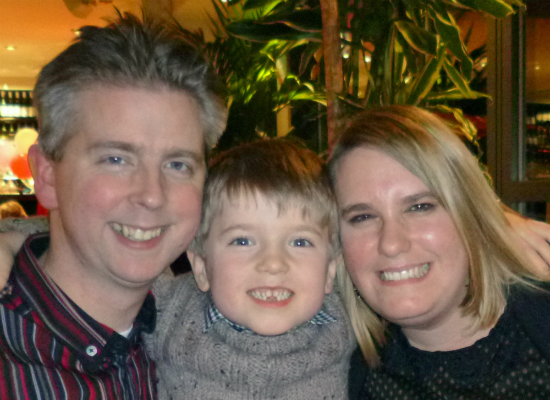 A concert on May 7th will raise money for Arthur Rank’s Hospice at Home service.

On 7 May classically trained soprano Lisa Kennedy, her friends Rachel Godsill (soprano) and Anne Bradley (pianist) will perform arias and duets by Mozart, Puccini and Verdi in ‘An Afternoon of Opera Favourites’. The event at St Mary’s Church in Linton will honour the memory of Lisa's husband, Mike Kennedy who lost his seven year battle to cancer at the age of just 39, in February 2014.

Mike was first diagnosed with cancer in 2006, when Lisa was six months pregnant. A catalogue of diagnoses and treatments were to follow. The couple’s son Robbie was born on 11 January 2007, with the new father returning to hospital only three weeks later to have a large tumour removed from his bowel. However, the cancer had already spread to his liver.

After a year of radiotherapy, chemotherapy and two major operations, a year of relative normality with his young son followed, only to be broken by the devastating news that the cancer had reached his lymph nodes, and later his spine. Despite the continuing treatment, redundancies and relocations, Mike’s outlook remained positive. In an interview published in June 2013, Lisa said: “I think his positive attitude is a big part of why Mike’s still here. And he has a very strong bond with Robbie. They are very close.”

Between holding family life together, supporting Mike and bringing up her son, Lisa continued to focus on her singing and was delighted to later perform the role of Adele in Die Fledmaus with Thrapston Plaza Opera: a dream come true having not performed in an Opera since University.

Having moved to Linton in 2012, the family came into contact with the Arthur Rank Hospice. The Charity supported them with applying for benefits, with Mike attending Day Therapy, receiving care from the occupational therapy and lymphoedema teams, plus both he and Lisa benefiting from complementary therapy. Mike received help for pain management, but it wasn’t until November 2013 that he was admitted specifically for end of life care. However he was desperate to be at home: “Mike found it very hard to stay in the hospice, wanting to be at home with his family and to die at home, but his pain was very difficult to control at this time. During Christmas 2013 he was partially released, returning every day for pain management.”

Following a particularly hard night the couple visited the Hospice, having reached crisis point: “It was at that point that we received a level of care that we didn’t think was possible. We received wonderful support in terms of equipment and training from occupational therapy; we had carers coming in every day to wash and dress Mike; we had the community cancer nursing team to administer and monitor Mike’s drugs; and the support of our GP. Most valuable to me was the Hospice at Home team who came almost every night before Mike died. Being a Mum with a young child I wouldn’t have been able to cope without them.”

“The support we received did not change what we were going through but it enabled us to cope. Having seen first-hand what the hospice does for those who are dying is so humbling for me. I will be forever grateful for what they did for Mike and for us as a family.”

The care which Mike received from Arthur Rank Hospice Charity’s Hospice at Home team enabled him to die at home in February 2014. Explaining her motivation for the performance on 7 May, Lisa concludes: “It means a lot for me to hold this concert in Mike’s memory and to raise money for the Arthur Rank Hospice at Home team. I hope not only to raise money but also honour all those people who provided care to Mike and to us as a family. “

'An Afternoon of Opera Favourites' will take place between 3.00pm and 5.00pm on Saturday 7 May at St Mary’s Church, Church Lane, Linton, CB21 4JX, followed by a fundraising afternoon tea. Tickets are £7 on arrival only, children are free.

. If you wish to donate but are unable to attend, please visit: www.justgiving.com/Lisa-Kennedy7