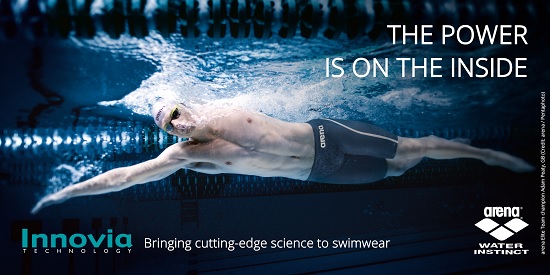 As swimmers gear up for Rio, arena’s record-breaking carbon technology suit has gone to yet another level with the new POWERSKIN Carbon-Ultra suit, the result of arena's work with Cambridge-based Innovia Technology.

The suit incorporates an outer ‘carbon cage’ shell to maximise hydrodynamics with a revolutionary inner ‘Ultra-Link System’ to optimise the athlete’s physiology. The ‘power inside’ concept was inspired by arena’s work with Innovia Technology, a global breakthrough innovation consultancy; this winning partnership has brought cutting-edge science to swimwear.

Innovia, headquartered in Cambridge, UK, has been working with arena since 2008, providing new levels of theoretical understanding into how a swimsuit can be designed to maximise the effectiveness of the swimmer’s actions in the water.

arena was the first swimwear company to engage in textile and fluid dynamics research in order to develop the fastest, lightest, smoothest and most durable products for the competitive and recreational swimmer.

Now, the company is releasing a brand new swimsuit, POWERSKIN Carbon-Ultra, ahead of the upcoming Summer Olympics in Rio.

The R&D team at arena, along with Innovia and an international scientific network, have analysed how introducing an active inner layer can maximise the effectiveness of the swimmer’s actions in the water, over and above the existing benefits of the POWERSKIN Carbon series.

Andy Milton, innovation consultant at Innovia, says that the POWERSKIN Carbon series took high performance swimwear to a new level: “To support the breakthrough design, we integrated deep knowledge of the physiology and mechanics of swimming with insights into apparel development. This embraced fluid mechanics, material science, physiology and psychology.

“As a result, we were able to provide arena with options for the design of the suit, including guidelines for fabric construction, and also advice for communicating the benefits of the technology effectively to professionals.”

The POWERSKIN Carbon series introduced a cutting-edge carbon weave, which provides intelligent compression, keeping the athlete’s body in the optimum position at all times. Carbon fibres are thinner than a human hair and intricately woven into the suits. The result is a suit that is remarkably strong and durable, and able to compress without constricting. These strong fibres also prevent the immense stress on the muscles that many swimmers experience while competing.

The new suit takes carbon technology further: The outer shell features an Ultra-Cage where increased carbon in the material provides a strongly anisotropic response (‘stretchy’ in one direction; stiff in another) accurately conforming to an athlete’s shape, distributing pressure to streamline the body and make every movement count.

In addition, the Carbon-Ultra suit incorporates a new level of support and movement management with an internal structure: the Ultra-Link System. By connecting key muscle groups and isolating upper and lower body movements, this revolutionary system increases the swimmer’s efficiency and improves body position in the water. In addition, by targeting specific compression zones, it further supports and streamlines the body to reduce turbulence and drag.

The POWERSKIN Carbon-Ultra suit incorporates all of the technical advances that have made arena suits stand out and then takes them to the next dimension.

Dan Ward from the Innovia design team says: “The biggest difference is the internal structure which maximises the effectiveness of the swimmer’s actions in the water. The vital element in the ultimate success of the product is that athletes have complete confidence in its performance.”

There is evidence that this is happening. Professional athletes involved in trials have already endorsed the Carbon-Ultra suit. Four-time world champion in butterfly, Sarah Sjostrom of Sweden, says: “The key strength of the new Carbon-Ultra is that I feel I have greater movement in the water.”

The arrival of POWERSKIN Carbon-Ultra communicates a strong message to athletes – that the arena family is in robust health and will continue to provide swimwear at the leading edge of swimming technology.

Find out more about Innovia Technology at: www.innoviatech.com

Find out more about arena at: www.arenawaterinstinct.com