More than £500,000 raised for Arthur Rank Hospice Charity by Your Hospice Lottery 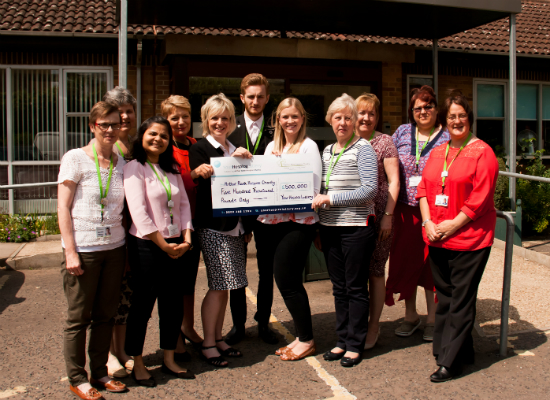 Local supporters have made a real difference to the local community by raising over £500,000 for the Arthur Rank Hospice Charity, by playing their fundraising lottery.

The weekly Lottery draw last Friday (20 May), saw the total figure raised for Arthur Rank Hospice Charity rise over the half a million pound mark to £503,927.50. Friday the 13th’s draw earlier in the month was lucky for some with two of Arthur Rank Hospice’s lottery players’ winning: one the £1000, and the other the £100 prize!

Your Hospice Lottery (registered charity number 280919) has been running since May 2011 on behalf of Arthur Rank Hospice Charity and is about to celebrate its fifth birthday. Local support continues to grow with almost 8,000 numbers played by hospice supporters each week. The money raised makes a significant contribution to the £2 million which the Hospice is required to raise each year to supplement the funds contributed by the NHS, making a huge difference to people living with life limiting conditions across Cambridgeshire, who can access their service free of charge.

Your Hospice Lottery costs players just £1 a week and is an easy and fun way of supporting your local hospice, with the chance of winning one of up to 111 weekly prizes, including a potential rollover jackpot prize which increases weekly up to a potential £10,000! The current jackpot standing at its highest yet of £6,750. Over the past 5 years the Lottery has created over 3,100 winners playing on behalf of Arthur Rank Hospice, each winning a cash prize!

Dr Lynn Morgan, Chief Executive of Arthur Rank Hospice Charity comments: “When we set up the lottery with Your Hospice Lottery we all took a leap of faith. We were really impressed with the St Helena process and the professionalism of the team. We have, and hopefully continue to have, a great working relationship with Your Hospice Lottery team which has helped cement relationships in other areas between the two hospices.”

She continues: “We have always felt absolute partners in taking the lottery forward and it is amazing that it has made so much money, particularly as there was no upfront investment from the Arthur Rank Hospice and we have not had to have a dedicated in-house resource. We look forward to the years to come and celebrating when it gets to £1 million! Hopefully our new hospice will give us the space and opportunity to create ways for our supporters to sign up at the hospice as well.”

Alex Howe, Head of Lottery at Your Hospice Lottery, adds: “We are delighted to have helped Arthur Rank Hospice Charity raise over half a million in the past five years. There are currently 7900 players and they are growing: its great way to raise money for local hospice care.”

For more information or to join the lottery in support of Arthur Rank Hospice Care, visit www.yourhospicelottery.org.uk/arthur-rank-hospice-charity or telephone 0800 285 1390 to speak with the Your Hospice Lottery team.