Kickstarter success for the Cyrus soundKey 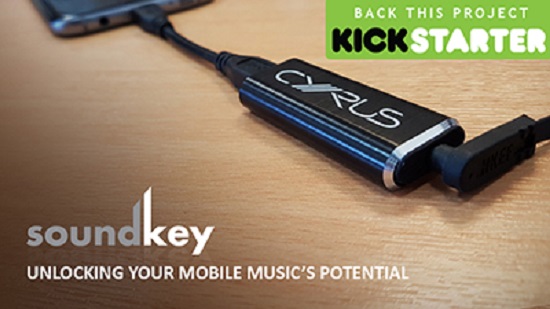 Launched on 1st July, with the aim of raising £50,000 to develop the Cyrus soundKey, the Kickstarter campaign has seen Cyrus Audio and new technology fans embrace the product with so much enthusiasm that the full amount was raised during the first few hours. The campaign will remain live until 30th July, giving ample opportunity for fans of high quality portable audio to secure their own Cyrus soundKey at 30% off the retail price by pledging just £69.

Cyrus Audio’s Kickstarter campaign for the soundKey micro-sized DAC (digital to analogue converter) has beaten all expectations by being fully funded on the first day of the campaign.

Simon Freethy, managing director, Cyrus Audio, reacted to the initial funding news by saying, “Wow! A huge thank you to everyone who has pledged so far and welcome to the Cyrus family. We have been completely blown away by the response we have had to the launch of the Cyrus soundKey on Kickstarter.  You have really engaged with some fantastic comments and great feedback on ways to further improve the product.”

Backers of the campaign, who appreciate the quality that the Cyrus brand stands for, have posted many encouraging comments on the Kickstarter page, including, “As an owner of many Cyrus products over the years this will allow me to enjoy quality sound while both away and at home.” And, “This is also my first Kickstarter. I run a full Cyrus system, and love it dearly, so can't wait for this.”

World-renowned freelance mastering engineer from Abbey Road Studios, Miles Showell, is also looking forward to the Cyrus soundKey. “As someone passionate about good sound, I have always felt that the on-board digital to analogue converters in most telephones and other portable devices was the weakest link. At a stroke the Cyrus soundKey completely removes this problem and at last offers the promise of really good quality audio on the move. I am very excited by the potential of the Cyrus soundKey”

What makes the Cyrus soundKey so special is that it bypasses the low quality audio circuits of mobile phones and tablets, taking the digital music signal directly to its high quality DACs and amplifiers to improve the sound for headphone users. The Cyrus soundKey will work with wired headphones, with an optimum headphone impedance of between 16 and 64 Ohms, making it compatible with 99% of available models.

It is compatible with Android devices with USB OTG (on-the-go) running OS5 Lollipop and above, Apple devices with iOS7 and above (using the Lightning or 30-pin to USB camera adapter) and Windows phones (with USB dual role function and Windows 10 or later). Any laptop with a USB connection can also be used, with a Cyrus soundKey giving a significantly enhanced desktop audio experience via headphones.

Its ultra low power consumption, just 50mA current draw, from the phone – around half that of rival products – ensures the phone’s batteries won’t run down anywhere near as quickly as with other brands’ solutions.

A dedicated microsite at www.soundkey.cyrusaudio.com features more information about the product.

The Kickstarter Campaign was created and managed by Peek. www.haveapeekatthis.com

Peek is a recommended branding agency that helps businesses succeed through insight and imagination. Our clients range from global PLCs to local start-ups and we love working with them all including: ARM, Cyrus Audio, Telespazio Vega, Insignis Asset Management, AXA and Petface.