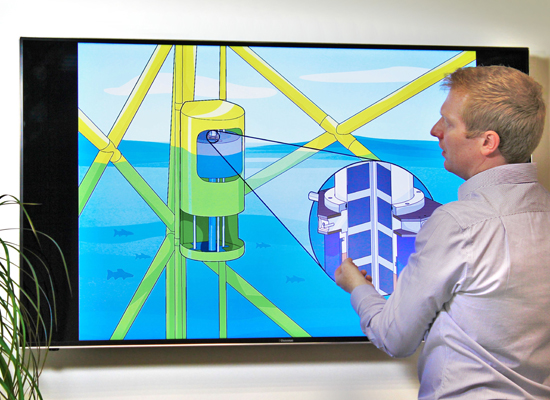 Trident Energy – an independent developer of enabling technology for the offshore renewables industry – has announced today that a technology optimisation project with 42 Technology has ‘exceeded all expectations’ in improving the performance of the company’s novel linear generator concept.

The re-designed concept, named PowerPod II, represents a major advance for Trident Energy and its WaveDrive project, which is aimed at developing a generic power take-off (PTO) system for use in a broad range of wave energy converter (WEC) devices.  Trident’s WaveDrive project was awarded almost £0.5M in development funding earlier this year from Wave Energy Scotland (WES) as a Stage 2 project in its PTO innovation call.

“42 Technology has undertaken a detailed design review of Trident’s existing PowerPod linear generator and has successfully optimised it for performance, robustness and manufacturability.  The design improvements and project outcomes have exceeded expectations and the two companies are now progressing to detailed design of the new linear generator technology,” said Steve Packard, CEO of Trident Energy.

Tim Hurst, managing director of Wave Energy Scotland added: “I am pleased to see the improvements to this technology’s performance.  This is a success for Trident and an excellent contribution to the advancement of wave energy technology.”

The new PowerPod II concept is based on a single generic design that can be adapted for use in different types of wave energy converters and certain tidal energy devices, potentially enabling higher manufacturing volumes, lower cost and faster commercial deployment.  The new concept is similar in size to its predecessor but it generates 50% more electrical power on each stroke thus helping WEC developers implement more cost-effective and competitive systems.

The magnetic stack configuration has been optimised to allow the linear generator to operate horizontally, widening the available options for installation and operation.  Improvements to the seal design for ‘in-sea’ operation and a more robust bearing solution have been implemented to further increase reliability and reduce maintenance cycles. The improved PowerPod II design is also fully controllable using solid state power electronics, which opens the door to advanced “real-time” control systems and improved energy capture efficiency of WEC devices.

In addition to 42 Technology, Trident has also appointed a number of other leading engineers and academics into its WaveDrive project team consortium for their expertise in using state-of-the-art modelling and analysis tools to help solve specific design challenges.

42 Technology is a product design and technology innovation consultancy that partners with its clients to create brilliantly successful products. It's based in St Ives, near Cambridge.