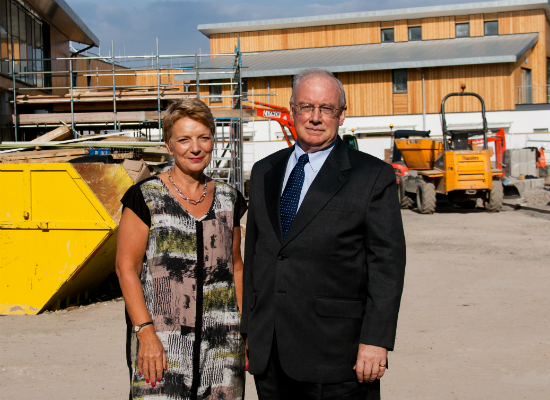 The search is beginning to find a new Chair to join the Arthur Rank Hospice Charity in January 2017. Here is a fabulous opportunity to make a real difference as the Hospice moves into new phase.

The Arthur Rank Hospice is on the brink of taking over their new, state-of-the art £10.5 million hospice at Shelford Bottom, Cambridge. Patient care will be transferred to the new facility in the middle of November.

The opening of the new hospice will mark a momentous achievement for the staff and trustees of the Arthur Rank Hospice Charity. The Charity took a further bold step last year when it opted to move from being managed by the NHS to a model which saw the NHS staff transfer across to the charity thus becoming an independent hospice with some of its care being funded under an NHS contract.

These significant developments for the charity have all been achieved under the Chairmanship of Stuart Evans. Stuart joined the Board of Trustees in 2007 having got to know the charity through his wife Brenda who was, and continues to be, a devoted volunteer at the hospice. After nine years of bringing his entrepreneurial talent to the Board of Trustees (seven years as Chair), Stuart has decided to step down at Easter next year and the search is beginning to find a successor to join the charity in January 2017.

CEO of Arthur Rank Hospice, Dr Lynn Morgan (pictured with Stuart Evans) comments: “Stuart has been a wonderful Chair and has been able to help up drive forward the vision of becoming independent and building a hospice fit for the 21st Century. His successor will find it a hard act to follow but we have an excellent board of trustees and we hope to get someone who will bring as much enthusiasm and vision to the role of Chair, to ensure that our future mirrors our current and past success."

For more information about becoming Chair of the hospice go to
http://www.arhc.org.uk/arhc-vacancies.asp (closing date 18 November)