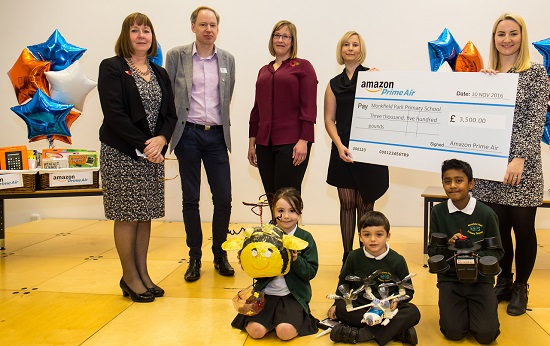 The innovative and inspiring ideas of six Cambridgeshire primary school pupils have won top places in the Amazon ‘Design a Drone’ competition.

Monkfield Park Primary School in Cambourne topped the leader-board, taking first, second and third places for the ‘building’ category.  Year Two pupil Lauren A was awarded the top spot for her ‘Busy Bee’ drone, which she hopes will deliver toys to children who don’t have any.

Second place went to Olli H, age six, for his ‘Fin 100’ drone, which will deliver his favourite foods; egg on toast and pizza, and third place to Nithyan K, age nine, for his ‘First Aid’ delivery drone.

The successful young engineers were awarded their prizes in a special ceremony during a school assembly. Winning students took home gift baskets of science, technology, engineering and maths (STEM) prizes, and won up to £3,500 for their schools. First place winners will now get the chance to tour Amazon Prime Air’s Development Centre in Cambridge, where their creations will be on display for a month.

Chief Executive of Cambridgeshire County Council, Gillian Beasley, a competition judge, said: “The standard of the entries and creativity shown is testament to the imagination of primary school students in the county. It was a fantastic competition to judge, and the selected winning entries showed a real engagement with using science to create. I hope this will act as inspiration for students in the future.”

As part of its Amazon in the Community programme, Amazon invited children across Cambridgeshire to play their part in the future of science and technology. Students were asked to draw or build their own interpretation of a model delivery drone using materials found in their everyday lives, andwinning entries were chosen for their creativity, application of science and the benefit the drone would bring to society.

Lauren Kisser, Operations Director at Amazon Prime Air, commented: “We developed this competition to encourage students and teachers to think about science and drones in a different way. Just as Prime Air will make shopping greener, safer and easier than driving to the store, the winners of this competition were able to harness this technology for wider social good with drones delivering pet care, first aid and charity donations. The judges worked hard on selecting the winning submissions, and we’re really pleased with the results. We can’t wait to present the prizes to the schools and winning students.”

The Amazon in the Community programme focuses on helping children succeed in today’s digital society and economy, including creating a positive learning environment, helping young people into work and developing essential STEM skills.

Prime Air is a future delivery system from Amazon designed to safely get parcels up to 5 pounds to customers in 30 minutes or less using small drones. For more information on Prime Air, visit www.amazon.com/primeair.

"Safe Harbor" Statement under the Private Securities Litigation Reform Act of 1995: Statements in this press release regarding Amazon.Co.UK Ltd's business which are not historical facts are "forward-looking statements" that involve risks and uncertainties. For a discussion of such risks and uncertainties, which could cause actual results to differ from those contained in the forward-looking statements, see "Risk Factors" in the Company's Annual Report or Form 10-K for the most recently ended fiscal year.