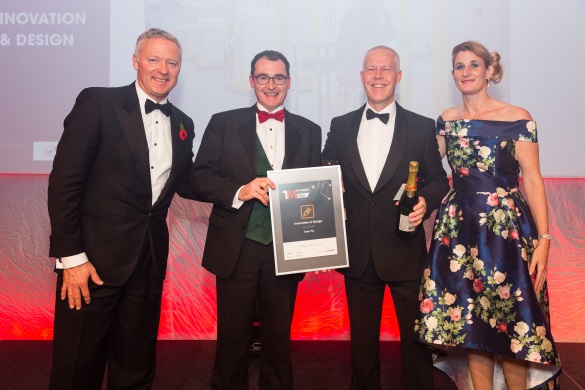 Xaar plc, the leader in industrial inkjet technology, is delighted to win the Design & Innovation Award and be a People & Skills Award finalist at The Manufacturer MX Awards ceremony (2nd November, Birmingham, UK). In addition, Xaar’s Justin Noble was a finalist for the Young Manufacturer of the Year Award.

The Manufacturer MX Awards is a prestigious annual programme delivered by The Manufacturer magazine, in association with the Institution of Mechanical Engineers, which recognises and celebrates the best performing businesses in manufacturing. The judging process for the 2016 Awards consisted of over 30 highly experienced manufacturing experts and a rigorous procedure involving desk based judging, factory site visits and interviews with the panel to ensure they identified the very best of UK manufacturing.

“This year there was an increase of almost 25% in the number of entries and the calibre of submissions was extremely strong” says Nick Hussey, CEO of the Hennik Group, organisers of the Awards.  “Many companies entered multiple categories which, to me, demonstrates the breadth of their all-round manufacturing excellence.”

Colin Marshall and Ian Harpur accepted the Design and Innovation Award at the ceremony on behalf of Xaar who beat several well-respected manufacturers including McLaren Automotive.

“To win this particular Award is especially thrilling as 2016 marked the year when Xaar truly branched out into multiple industry sectors, launching a range of new products, some of which have been in research and development for a number of years”, says Ted Wiggans, Chief Operating Officer at Xaar. “During the judging process we discussed the collaboration throughout Xaar, across many teams, which produces robust design processes, has delivered over 250 patents, and ultimately results in innovative inkjet printheads, of which over 95% are exported globally. I’m very proud and pleased that the hard work and collaboration of the many teams across the company has been recognised with such a prestigious award”.