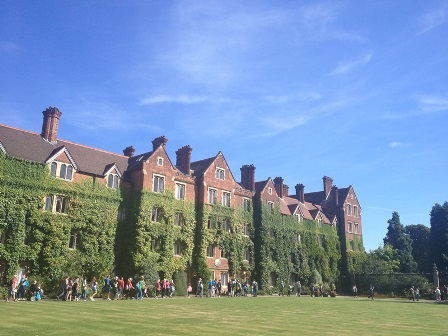 A total of more than £440,000 has now been raised by the Bridge the Gap walk in its 15 years.. The unique walk, which took place this year on Sunday 11 September, treated participants to unrivalled views of the City’s colleges, gardens and even the University Library, in a fitting celebration of the building’s 600th anniversary.

Fourteen hundred and seventy-seven people registered before the event and 636 signed up on the day itself, to walk the route in the glorious sunshine and enjoy temperatures of 20 degrees. The weather was a definite bonus for many, particularly given the heavy downpours of the previous day, but there were positive remarks about more than just the weather from walkers as they crossed the finish line.

Trevor George from Cambridge who took part in the walk for the first time with his wife Maureen, said: “I’ve always fancied doing it this: I was a policeman in Cambridge for 30 odd years and I’ve walked most of this area but not in the way I’ve done it today - looking at it slowly and enjoying the history of the place. One of the views looking off Clare Bridge is phenomenal and as you look towards St John’s you’ve got an old building, part of Trinity Hall, which I thought was stunning.”

Mick Taylor adds: “I’m a local born and bred and I’ve done it every year. As someone who is into photography and history, it’s interesting to go inside the colleges. As you go around the corner you never know what you’re going to see. There’s some lovely architecture.”

Corrine Maskell from Milton, who crossed the finish line with her husband Colin, commented: “It’s nice to walk around all the different colleges and we went into the University Library for the first time ever, which was very nice: It wasn’t quite what I expected – I thought it might be a bit more of an old fashioned library with book cases right up the ceiling and ladders sliding along. It wasn’t, but you could see all of the catalogues and things, which was nice. Even if you’ve lived in Cambridge all your life, you should come and do this because you see a side of Cambridge that you just didn’t know existed.”

The funds, raised by registration fees and walkers’ sponsorship will be evenly split between Arthur Rank Hospice Charity and Romsey Mill. Donna Talbot, Director of Fundraising and Communications at Arthur Rank Hospice Charity, says: “We’ve been blown away by the support that Bridge the Gap has received year after year, both in terms of local community support to help put the event on and the number of both residents and visitors from further afield who come and take part on their Sunday morning. We even had one gentleman from Australia email to say what a wonderful experience it was for him, and how he was taking some very happy Cambridge memories back to the southern hemisphere with him!”

Georgina Forbes, Community Fundraiser for Romsey Mill, adds: “We were delighted to be invited to be part of the Bridge the Gap Walk for the first time, this year. It is a fantastic event, bringing the whole of Cambridge together to see some of the historic University buildings and beautiful College grounds close up – whilst also raising much needed funds for two local charities that provide vital care and support to help hundreds of people each year. For many of the families with whom we work, this was the first time that they had seen some of the delights of the city in which they have always lived, and they are already looking forward to next year’s Bridge the Gap Walk.”

The Charities would like to extend their thanks to all who took part by walking on the day, as well as: the University of Cambridge for their enthusiasm and cooperation as regards the route; sponsors The Cambridge Building Society, Cambridge Assessment and TTP Group; Waterbeach Brass Band for their wonderfully English musical entertainment at the finish line; The Cambridge Rotary for their organisational support and production of the route map; Cambridge Cadets and volunteers from both Arthur Rank Hospice Charity and Romsey Mill who helped marshal the route; the Society of Cambridge Tourist Guides for being on hand for queries about the City’s quirks and history; Cambridge Blue Belles WI & Free Cakes for Kids and the many more who baked for the Time for Cake tent; Romsey Mill’s magicians and story tellers; Aristocaters who provided sandwiches for volunteers on the day; the Cooperative on Mill Road for generously donating water and fruit for walkers; Margaret Warner for her donations from the proceeds of the sale of her knitted items and all those who came across the event on the day and chose to make a donation whilst enjoying the sunshine and the fabulous brass band.