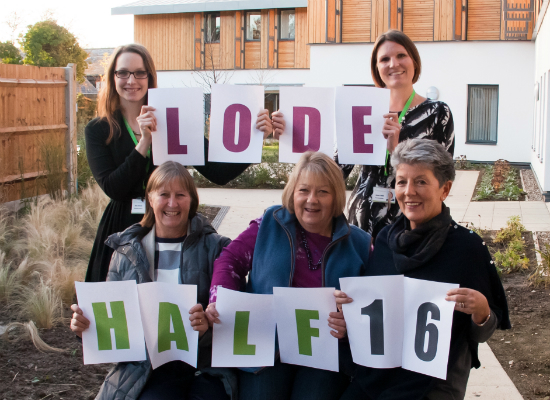 Arthur Rank Hospice Charity was delighted to receive a visit from the organising committee of Lode Half Marathon, after £4600 was donated from registration fees and over £1000 via sponsorship, by those taking part in the November event. The race was at full capacity for the second year with 250 runners taking part - including five representing the Charity’s own Team ARHC - raising a grand collective total of over £5500!

The half marathon, took place on Sunday 6 November, with a route winding around the flat fenlands surrounding Lode, Reach and Burwell. At its heart the event has real community spirit: with an organising committee made up entirely of Lode residents; backed up by local companies, including Bush Sales & Lettings, Bottisham Stores, Ridgeons of Cambridge, Mead Construction Ltd, Sweatshop (Cambridge), Tesco Fulbourn and Halls of Cambridge; and supported by generous individuals in the community who help with stewarding, timekeeping, serving refreshments, baking cakes and signposting the route.  A special thank you for use of land and equipment is also extended to The National Trust, the Environment Agency and Clive and Belinda Purbrook.

This was the sixth year for the event, which began as the idea of David Peck in 2011 as a fundraiser for what was then Lode Social Club, with the funds being split with a local charity. Initially one hundred runners took part in that inaugural year, with the event increasing in popularity and reputation to having now raised a grand total of £16,500 for local charities. Another forty registered the 5K Family Fun Run option, alongside the two hundred and fifty who entered for the half marathon route.

Tessa Shrubs, Race Secretary, explains their choice of beneficiary: “Every Charity that we’ve raised money for over the years has - sadly I suppose really - been one that somebody in the village has been touched by. There were people in the village - those who helped with the run as well - that had experience of the Arthur Rank Hospice and felt it was a really good cause, especially with the new building, so we decided together that we would do it for the Hospice.  A big thank you to all the runners who took part and the brilliant race stewards too: many have supported us over the years.”

There was much complimentary feedback from those taking part, one of the runners adding: “As a family we have taken part in many events over the last few years and this was one of the friendliest and best run we have been to. We all hope to return next year.  Well done - you all did Lode proud!”

Photographs of the day can be found on the Lode Runners Facebook page. Next year’s event will take place on Sunday 5 November 2017.

If you would like to run for Team ARHC, there are places available for the Cambridge Half Marathon on 5 March 2017. For further information, please visit http://www.arhc.org.uk/cambridgehalfmarathon.asp