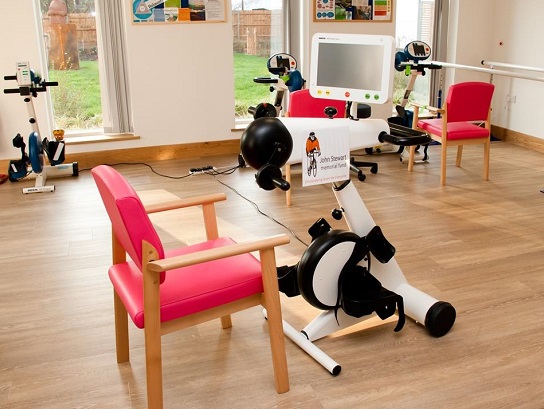 Arthur Rank Hospice’s therapy team are delighted to announce that they have installed a fourth Medimotion bike in their new Shelford Bottom home. The top of the range, interactive piece of equipment, joins three other Medimotion bikes – two of which were kindly donated by members of the public – in the Hospice’s newly kitted out physiotherapy gym.

The therapy team, which includes two physiotherapists and three occupational therapists, have been fundraising for the bike since 2015 after it became clear that the one original Medimotion was becoming over-subscribed. Therapeutic benefits of the specialist piece of equipment include loosening of limbs, prevention of deconditioning, the release of endorphins and a positive sense of achievement. There is a growing body of evidence that such exercise can have a huge impact on the well-being and quality of life of those living with a life-limiting illness. One patient said “Cycling again: it felt like a dream, it was wonderful. I could do that all day. Thank you.”

With a long list of people waiting to use the original Medimotion bike, an ambitious fundraising target of £5000 was set to allow the purchase of another. Fundraising efforts by the therapy team have included personal and team challenges including the London to Cambridge Cycle Ride (alongside a team from Sepura) and a storm-swept walk from Fort William to Inverness.

Colleagues from the hospice’s wider team supported Bake-Offs, Pamper Evenings and Quiz Nights and the local community played a part supporting activities such as a Medimotion-Bike-a-thon at Metro Bank (St Andrew’s Street, Cambridge), fundraising at the Haddenham Beer Festival, a donation from the Waitrose (Huntingdon) community matters scheme, and through donating to collection tins at local shops and events.

Having reached a grand total of £3,754 towards the target, the John Stewart Memorial Fund, a charitable fund managed by Cambridgeshire Community Foundation, stepped in to donate a further £2,396. Such a wonderful contribution allowed the team to buy the best, top of the range model - the MOTOmed MUVI. This fully interactive piece of equipment additionally supports passive as well as active exercisers, varies location or mood through choice of video and music, and/or can enables patients to plug in their own USB for their own selection of music or photos.

Sue Rossitter, clinical specialist lymphodema and therapy team lead, explains the huge difference it will make: “The idea is that groups of patients will be able to have exercise groups with three or four of them cycling along at the same time: like our version of a spin class! In a group setting, participants motivate one another and gain so much from encouraging and celebrating their own and others’ achievements.”

The John Stewart Memorial Fund was set up to encourage sport for everyone as John strongly believed in the importance of sport for a happy, healthy and fulfilled life, even when increasingly disabled by the prostate cancer that took his life. Catherine, John’s widow, adds: “I am so pleased that we were able to help through making this grant and it’s wonderful to hear that the new Medimotion bike is living up to expectations. The timing of its arrival at the Hospice on the 15 December was particularly special as it was John’s birthday and he would be so pleased to leave such a lovely legacy.”

Lynn Morgan, CEO of the Arthur Rank Hospice Charity, comments: “We would like to extend a warm-hearted thank you to all those who have supported the fundraising efforts of our therapy team, the John Stewart Memorial Fund and those generous individuals who heard about our quest and donated the two other bikes: it’s wonderful that we now have the space and equipment in our new home to be able to run group exercise activity - a first for us. I have no doubt that the benefits for our patients will be profound.”