Metathesis metal mania – how low can you go…? 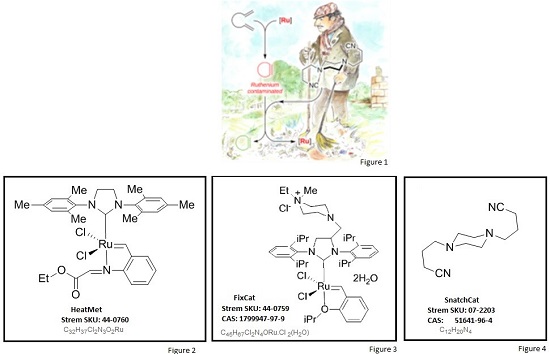 A totally unscientific SciFinder analysis shows more than 1,800 papers about olefin metathesis in 2016, up from an average of 1,575 per year since 2010. The current popularity of metathesis in chemistry speaks to the remarkably efficient transformations that can be achieved – but this wasn’t always so.

Metathesis became a practical method for organic chemists with the introduction of homogeneous catalysts in the ‘80s and ‘90s.

SciFinder (equally unscientific analysis) also suggests only single digit numbers of papers on the subject each year through much of the ‘90s. Chemical & Engineering News appears to have catalyzed (sorry) a bump in interest with back to back articles on the subject in 2002 (“Big Deal” and “Early Days”)…only to be outdone by the 2005 Nobel Prize in Chemistry awarded to Yves Chauvin, Robert Grubbs and Richard Schrock “for the development of the metathesis method in organic synthesis”.

Can the Efficiency of Metathesis Translate to Production?
On the fine chemicals manufacturing front, catalytic chemistry methods are generally popular, cost effective choices, but metathesis applications, while gaining ground lately, are still lagging relative to the polymer and commodity industries. Catalyst cost and residual catalyst in products appear to be among the main culprits.  Apeiron Synthesis is working hard to address these concerns with robust, highly efficient catalysts, and a home-grown team of really geeky process chemists who are totally immersed in metathesis chemistry – from catalyst design to process optimization. The natural atom efficiency of metathesis, combined with low catalyst usage, can go a long way toward economically viable, green process.

Strem and Apeiron – Upgraded Catalyst Options
Apeiron is continuously innovating and creating new catalysts and applications; and Strem is helping to spread the word.  GreenCat (44-0750); AquaMet (44-0768); nitroGrela (44-0758); LatMet (44-0753) and StickyCat (44-0765) are Apeiron’s core catalysts – chemically and functionally distinct, and scalable for production processes too. Each of these catalysts was developed to address a specific process challenge, and is available from Strem.

Apeiron’s catalysts in action can be found in the chemical literature, including in a 2015
issue of the Strem Chemiker. New Apeiron catalysts introduced to the Strem (online) catalog include HeatMet (44-0760) Figure 2, a latent catalyst that complements LatMet (44-0753) for polymer applications, and FixCat (44-0759)Figure 3.

FixCat (44-0759), similar to AquaMet (44-0768), is an efficient catalyst in alcohols, halogenated solvents and water, and can be readily immobilized on a variety of solid supports to afford a heterogeneous catalyst.  If residual metal cannot be tolerated in the product, these catalysts can get the job done without ever having the metal complex in solution in the first place.  Another catalyst with a similar function is StickyCat (44-0765), with its quaternary ammonium appendage that sticks tenaciously to silica gel – offering a way to pretty much quantitatively filter the homogeneous catalyst away from product.

Of course, Apeiron and Strem offer many catalysts beyond FixCat (44-0759) and StickyCat (44-0765) because some substrates just work better with another catalyst.  If there is a need for ultra-low residual metal while using other catalysts, there is now a ready solution. SnatchCat (07-2203) Figure 4 is a highly effective scavenger for metals, such as Ru or Pd. Just add a bit to the reaction mixture and filter through silica to afford products with single digit PPM (or less) residual metal.

Have your worked with any of these olefin metathesis catalysts? The Strem and Apeiron Teams would be delighted to hear about your experiences with these products and would be happy to help with any questions.