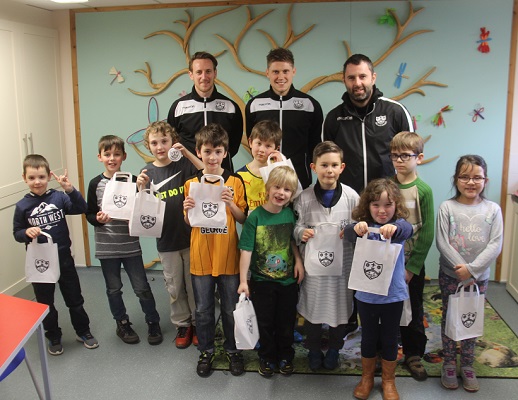 Siblings of children with life-threatening conditions supported by East Anglia’s Children’s Hospices (EACH) in Milton have enjoyed a skills session with players and coaches from Cambridge City FC.

As well as having a kick around, they presented children with a signed football, club shirt and goody bags.

Ben said: “It was a fantastic afternoon and brilliant to see all the children smiling and having fun. We put on some exciting footballing activities for them to try, which they were all brilliant at. I really hope they enjoyed it because I certainly did!”

Cambridge City chose to lend its backing to EACH at the start of this season and has so far raised £744.37 through three bucket collections, a quiz night and a Christmas fair.

The club will hold further bucket collections at its games on 25th February against Leamington and on 22nd April against St Neots Town.

There are also plans for officials to tour EACH’s hospice and for some of the children and young people cared for by the charity to be involved in a matchday experience including pitchside pre-match and half-time activities.

Sophie Baker, EACH Cambridgeshire Community Fundraiser, said: “We’re delighted that Cambridge City has chosen to back us not only by fundraising, but also by meeting and engaging with the children and young people we support. We wish them the best of luck for the remainder of the season.”

For more information about EACH, visit www.each.org.uk.

Image: From left, Cambridge City’s Buster, Ben and Robbie with siblings of children who receive care at East Anglia’s Children’s Hospices in Milton