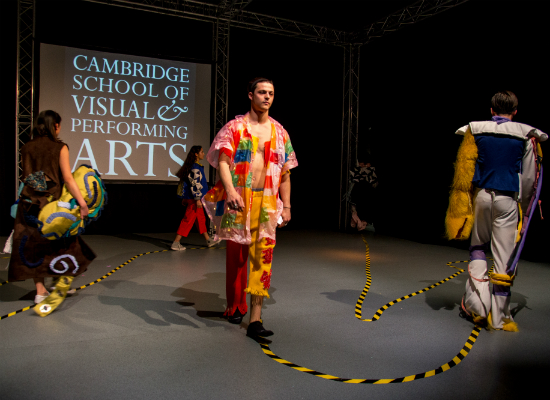 How have students raised funds for hospice care and awareness for the Charity's shops alongside completing assignment?

A unique design project recently completed by students from the Cambridge School of Visual and Performing Art (CSVPA) has raised £305.50 for the Arthur Rank Hospice Charity.

Over 30 students enrolled in the foundation year of the Fashion Design course at the college were each challenged by Chris Maughan, Head of College, and Rupert Morgan, Graphics and Illustration Lecturer, to purchase an item of clothing from one of Arthur Rank Hospice’s Charity’s high street shops and redesign it for the ‘FAD Ex Fashion Show’ (FAD stands for Foundation and Extended Diploma) which took place at the end of last month (Friday 31 March).

CSVPA’s fashion design students were challenged to make unisex suits on the theme of ‘editing the body’, using jackets they had bought from one of the Hospice’s charity shops, customised and paired with trousers tailored to match. The overall theme was blended with the student’s research into a ‘memory object’: something of significance to each student’s past. Examples of their creations included: So wing Cheng’s interpretation of a Chinese lantern using a heavy cream woollen cardigan paired with light pink cotton trousers ripped below the knee; Valentine Ryf’s design based on a beaded African bracelet including a bright blue denim jacket matched with striking red high waist trousers; and Size Man Hon’s colourful outfit inspired by a Honk Kong street light and designed using a pink rain jacket matched with bi-coloured red and yellow trousers.

Ahead of the garments being unveiled on the catwalk at 6-16 King Street in Cambridge, two minute films created the Fashion Design students (centring on the theme of ‘movement’) and by eighteen of the college’s Fashion Promotion students (focusing on ‘imperfection’) were also screened.

Community Fundraiser, Lauren Maitland, who attended on the evening said: “It was a spectacular show and both the fashion and film students did a fabulous job fulfilling the brief. It’s great that they were able to collaborate on something so completely innovative, which not only plays a part in their course and training but additionally has helped towards us raising the essential funds the Hospice requires each year. On behalf of the Hospice, we would like to extend a huge thank you to all who were involved and worked so hard to put together such an entertaining and successful evening.”

Arthur Rank Hospice now has four high street charity shops, including stores on Mill Road, Regent Street and on Woollards Lane in Great Shelford. The latest will open in what was the old Post Office on Cottenham High Street, on Wednesday 3 May.