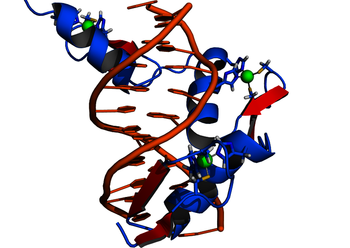 MRC-funded research from Sir Aaron Klug’s lab at the MRC Laboratory of Molecular Biology underpins a historic gene editing trial run by a US biotechnology company. Scientists are attempting to edit a gene inside a body for the first time, to permanently change a person’s DNA to cure a disease.

In a ground-breaking clinical trial, researchers in California have treated a patient with gene editing tools to treat a severe inherited disease. The patient, who has Hunter syndrome, was treated in November 2017 with a specifically engineered zinc finger nuclease to target a deficient gene in his liver.

People with Hunter syndrome lack a gene that makes an enzyme which breaks down certain carbohydrates. These carbohydrates then build up in cells and cause developmental delays, organ problems, brain damage, and early death. To correct the condition, scientists used zinc finger nucleases to insert a replacement copy of the defective gene thereby editing the patient’s genome in a pioneering clinical trial sponsored by Sangamo Therapeutics, a biotech company based in Richmond, California.

Zinc finger nucleases allow scientists to snip the DNA double helix in a precise location within the 3 billion bases, or letters, that are packed into each human cell. In this clinical trial, a zinc finger nuclease was targeted at an area near the promoter, or ‘on-off switch’, for a gene called albumin in liver cells. The natural cell repair processes then heal the severed strand using copies of a replacement gene that the researchers also supply; in this case the copies lack the disease-causing mutation in the original gene. The replacement gene’s activity is now controlled by the powerful albumin promotor. The idea is for these modified liver cells to function like a factory for making the enzyme missing in Hunter syndrome.

In 1996, a team at John Hopkins University fused a zinc-finger protein and an enzyme that snips DNA called a nuclease, creating prototype molecular scissors that in theory could target a unique site in the genome and cut it to induce a repair.  Now research aimed at optimising the technique, choosing a therapeutically useful target, and designing a zinc-finger nuclease with the right specificity started in earnest, and several biotech companies set up to exploit the technology in model organisms, crop plants and human cells, notably Sangamo Therapeutics in 1995 and the MRC LMB spin-out Gendaq Ltd in 1999. Gendaq Ltd was subsequently acquired by Sangamo Therapeutics for $30 million in 2001, and Sir Aaron continued to serve on Sangamo Therapeutics’ Scientific Advisory Board. Since then Sangamo Therapeutics has fine-tuned zinc finger nucleases as a platform for gene therapy and genome editing, resulting in several promising research programmes for treating HIV, haemophilia B, and other genetic diseases.

Genome editing is a powerful research tool that may transform treatments for genetic diseases. The recent emergence of the CRISPR-Cas9 system in 2015 promises targeted, highly efficient editing of DNA in cells using a process that is faster and more flexible to design, compared to the use of zinc finger nucleases.

In February 2016, Dr Kathy Niakan’s team at the Francis Crick Institute became the first to receive permission from the Human Fertilisation and Embryology Authority (HFEA) to use the genome editing technique 'CRISPR-Cas9' in human embryos. However, zinc finger nucleases have been the subject of research and development by the biotechnology sector for over two decades now, and their use in pilot human studies with over 100 subjects has built up a body of safety data. This safety data is vital, because it is required before any advance in biological understanding can be harnessed into therapies for improving human health. Genome-editing techniques such as CRISPR-Cas9 system or zinc finger nucleases are not only proving to be valuable tools for laboratory-based research, but in the case of zinc-finger nucleases, the approach has made it into the clinic.